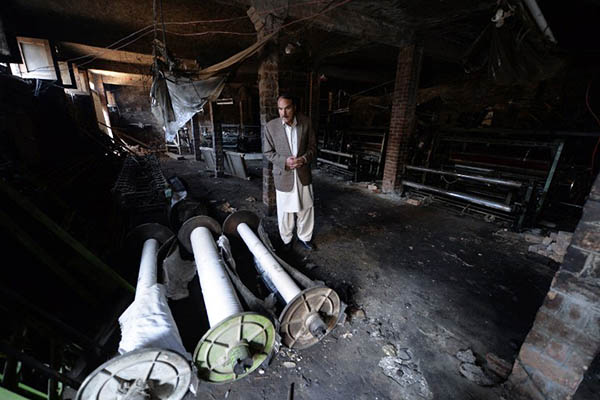 Manufacturers in Pakistan’s northwest worry that the once-thriving silk trade will never recover from the destruction caused by Taliban rule.

Five years after it collapsed under Taliban rule, the once-thriving silk industry in Pakistan’s Swat Valley is still in shreds, leaving thousands without work and entrepreneurs like Shaukat Ali counting the cost.

Ali’s family moved from Lahore to Swat in the late 1960s as they looked to capitalize on what was then a booming silk trade in the valley known as “Pakistan’s Switzerland,” renowned for its lush green mountains, waterfalls and streams. The industry began with smuggled yarn from Afghanistan, with investors drawn to the prospect of cheap raw materials and abundant labor.

At its height, the silk industry in Swat employed 25,000 people, mostly producing raw fabric, which was then sold on to textile centers elsewhere in the country to be turned into clothes. It was a rare manufacturing success story in the country’s northwest, which has lagged behind Pakistan’s main industrial cities in Punjab province and Karachi, the country’s financial nerve center.

Profits were good for the Ali family business—repairing machinery from the nearly 500 silk-weaving factories in the valley—until the Taliban took over in 2007. “I was earning up to Rs. 80,000 a month before the Taliban captured Swat,” Ali complained outside his workshop and its silent machines. “Now the industry has been destroyed and I am hand to mouth, under the debt of tens of thousands,” the 50-year-old said.

The Taliban insurgency in Swat began in 2007 and the militants took over for two years until an Army operation was launched to reclaim the popular tourist destination. During Taliban rule, the militants hanged people at crossroads and flogged women. In the Army campaign to dislodge them, factories were looted and workers fled.

“Up to 30 factories were completely destroyed during the militancy period,” said factory owner Ali Muhammad from inside his premises, full of jammed looms and broken equipment. “Many were directly hit by the shelling, then many others were looted,” he explained, adding that every factory owner faced losses because of the militancy.

Now that investors have headed to the relatively safer havens of Karachi and Lahore and large-scale yarn smuggling is a thing of the past, factory owners are losing hope that the industry will ever revive. Few have the means to restart on their own and confidence is shattered.

“The provincial government had promised us to set up an industrial zone to revive the silk and other industries,” said Ahmed Khan, president of the Swat Chamber of Commerce and Industry (SCCI). “But they have done nothing practical despite the announcements,” he added.

Khan, who himself owns a silk industry, said the factories now employ fewer than 4,000 and state help is needed. “Industry can’t recover without the industrial zone. If the government doesn’t do anything, there could be more unemployment,” he said.

Syed Imtiaz Shah, chief of the government administration in Swat, says officials are in the process of acquiring land to establish the zone. The zone would allow investors to set up industries at a specified place in the city where special incentives would be provided to the entrepreneurs. “Once, we get the land, the government will allocate funds for the establishment of the industrial state,” said Shah.

For Ali, the help must come soon. “I had many machines at my workshop, but I’ve sold them all except one to meet the expenses of family. I have a young daughter but no one is ready to marry her because of our poverty,” he said.