Home Scope How We Shortchanged Bangladesh

How We Shortchanged Bangladesh

‘Push them into the Bay of Bengal.’

Kamal Hossain, a former foreign minister of Bangladesh, has published his account of what happened in 1971, the year East Pakistan broke away from Pakistan as a separate sovereign state. He also adds a chapter on what happened after 1971 and after Pakistan recognized Bangladesh, in 1974, following 90 other states that had already done so the year before. It is a story of Pakistan committing to do things under bilateral agreements and then ducking out of it.

Hossain was one of the central figures of the Bangladesh Movement under Sheikh Mujibur Rahman’s Awami League. He was one of the counsels for Rahman in the Agartala Conspiracy case brought by West Pakistan against him, he accompanied the Awami League team to work on constitutional matters at the Round Table Conference called by Field Marshal Ayub Khan in 1969, and he was chairman of the Constitution Drafting Committee of 1972. Today, he is a senior advocate at the Supreme Court of Bangladesh. 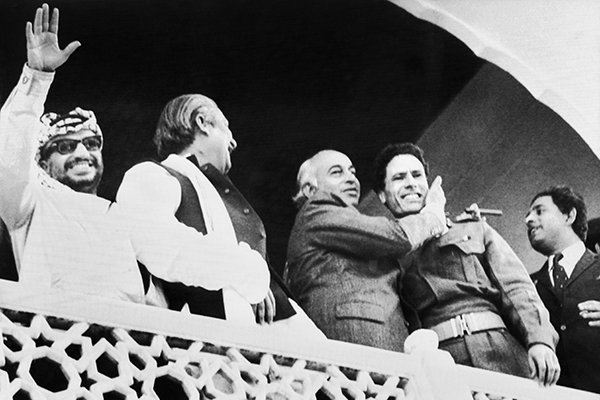 In his book Bangladesh: Quest for Freedom and Justice (Oxford University Press, 2013), he narrates how Bangladesh began by announcing that it would try, on the charge of genocide, 195 out of the 93,000 Pakistani troops and others kept in India as prisoners of war. It wanted Pakistan to take a number of non-Bengalis—totaling an estimated 650,000—who wished to be nationals of Pakistan; it asked Pakistan to share half and half the joint assets of united Pakistan, including the gold reserve resting with the International Monetary Fund; and it asked Pakistan to recognize the new state of Bangladesh.

Pakistan’s Prime Minister Zulfikar Ali Bhutto finessed these demands by first holding the Islamic Summit in Lahore which Rahman would want to attend but not without first being recognized by the state he was visiting. China came in handy at the U.N. Security Council: “Following the Chinese veto on Bangladesh’s application for U.N. membership in the Security Council in August 1972, Pakistan’s attitude seemed to become more negative on the issue of recognition,” writes Hossain.

When Dhaka tried to put on trial a dozen or so POWs for genocide, Pakistan, in May 1973, locked up a large number of Bengali civil servants stranded in Pakistan, and interned their families too. Then Pakistan went to the International Court of Justice on Bangladesh’s misapplication of the genocide charge. (Until 2013, Pakistan has approached the ICJ at least five times and lost on the basis of the “optional clause,” which it never reads.) Hossain, knowing his law, knew Pakistan would lose.

But Pakistan packed an unsettling punch. China vetoed Bangladesh’s entry into the U.N., and the Arabs spearheaded the Islamic bloc advising Bangladesh to “forgive and forget.” Hossain counts the moral “victories” he achieved in his parleys with Pakistani counterparts, foreign secretary Agha Shahi and foreign minister Aziz Ahmed, but is less admitting of the fact that he was floored by the cards Bhutto held against Rahman at the global level despite the romance in the West about a “people’s struggle” that succeeded against Pakistan’s military junta.

In the end Pakistan did nothing. It didn’t divvy the assets although it farmed out its extra PIA aircraft on contracts. Some of them it actually sold. It didn’t take the non-Bengali Pakistanis stranded in Bangladesh, called Biharis; and when it finally took a few thousand, it made a mess of it. It recognized Bangladesh at the time of its choosing, in 1974, much after it got its POWs back from India following the 1972 Simla Agreement, which many regard as a tour de force on the part of Bhutto leading a defeated nation.

Here’s the climax of the book: “When pressed to suggest what should be done to those [Biharis] who were clearly eligible and entitled to go to Pakistan, but whom Pakistan was not willing to accept, Aziz Ahmed turned round and said, ‘Why don’t you push them into India?’ When told that this was hardly feasible, he retorted, ‘Then push them into the Bay of Bengal.’”

On ‘Making a Muslim’

As a Bangladeshi, in the long run it hardly matters that Pakistan shortchanged Bangladesh. What is sad is that it shortchanged itself. By ducking away from its responsibilities, by hiding its history Pakistan created a cancerous culture of corruption and impunity among its military that still threatens to rip it apart.

Pakistan should offer an apology for all the harm they have done to the bengalies.PERIOD.

Apologise for what?? it was your people who started mutiny against its government.What did you expect bundle of roses ?? Get real. If this is the case then you should ask India or Britain to apologise for what happened in 1947. PERIOD.

Only some ignorant and arrogant people from Pakistan (not all) would justify the killings and massacres carried by the Pakistan army against the Bengali people in 1971. The whole world knows that the Bengali people revolted against the Yahya-led military dictatorship only after they denied the legitimate democratic rights of the people and let loose its military machine to carry out a brutal campaign of genocide in 1971. And certainly Bhutto was a co-conspiratorial, who could not accept a Bengali like Sheikh Mujib, as the head of a democratic government of Pakistan. His end was not that graceful.

There were, and still are, many good people in Pakistan. In the summer of 1971 Air Marshal (retd) Asghar Khan gave a lecture at the University of London Union Building (near Euston, London) in which he condemned the military way of ‘solving’ Pakistan’s problems. He argued for releasing Mujib from prison and engaging in negotiations and compromise to end the bloodbath going on in Bangladesh at the time. Unfortunately, the Yahya-Bhutto gang did not listen to this type of constructive engagement for peace but went on with their bloody murderous campaign. The result: breakup of Pakistan and independence of Bangladesh.

The rulers of Pakistan must apologise to the people of Bangladesh for the barbaric killings, rapes, torture and other abuses their predecessors perpetrated in 1971. By doing at least that, they can still return to the fold of humanity.

►it was your people who started mutiny against its government.◄

After said government would not rightfully hand over the reigns of political power to the DEMOCRATICALLY elected Mujib Rahman [as per constitutional rights].

This after economically/politically dominating and bleeding dry the eastern half over a period of 25+ years.

I agree with you ▬ there is nothing to apologize for 1971 from the point of view of a Pakistani. You Pakistani ppl were devils then and you are devils now. Thank الله‎ we are rid of you.

We won the elections (ever heard of it?) and power was supposed to be handed over to us which was not.

Hei Bada, this attitude of yours and a lot of your countrymen led to a lot killings including the Beluch leader, you guys need a DNA change.

Where is this book available?

What do we expect from a former FM of Bangladesh.

“push them into the Bay of Bengal”… So when Bangladesh is in a dominating position, it can follow any warped principle of morality, but cries when Pakistan did the same in the 70s by leveraging its superior global links. What hypocrisy by the author!

When has Bangladesh ever been in a ‘dominating position?’

If the Bengali Foreign Minister has the moral courage then he must he must mention the Terms of 30 year Friend Ship Treaty that Sheikh Mujeeb and his Government signed with India. No self respecting country can accept those terms that Bangladesh accepted.
If the minister has moral courage then he must Tell us Why India chose to Build Farkha Barrage on Bengal’s River soon after Bangladesh’s so called independence and not during Pakistan Era.

telling a lie is your character.india started farakkah dam in 1966 .1974 india inagurates the dam.it takes years to build dam.Dr kamal hossain is united nation official,member of the bar in royal court of england,joined lincon inn in england in 60s.members of the hague international tribunal for maritime jurisdiction,international,oil,gas panel.u are a madrasa educated person

pakistan is a rouge country. It first cheated india by promising to pay 300 crores towards pre partition debt which it did not. Then it cheated bangladesh by enslaving its people under the false pretext of islam. It then cheated russia by fighting proxy wars under the name of jihad for the US. Pakistan then cheated the US by double crossing by funding terrorist attacs with their own money. Till date it cheats the people of balochistan and kashmir under the false pretext of islam.

God is seeing this rouge country. Dont worry. They will be punished for their misdeeds. Unfortunately it is the liberal pakistani who is like you and me who will face the music for mistakes commited by the govt. But ultimately he selected the govt and he should suffer

Don’t worry very soon Pakistan will be wiped off by its own people by using its own atom bomb. Because Pakistanis only know hate and fight against each other.
Pakistan is the only country in the world which does not have any good relationship with any of its neighboring country.

Pakistan is a trouble maker. It harbours terrorists, in doing so it threatens both India and Bangladesh. We must unite against Pakistani terrorism

Want to thank the author for upholding such a distasteful Pakistan has done against Bangladesh and humanity as a hold. As a Bangladeshi, thankyou very much.