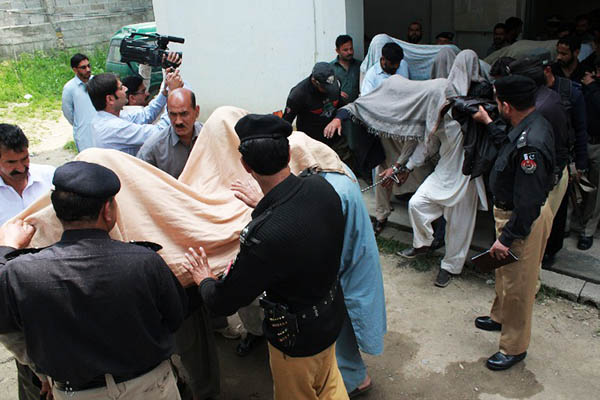 An anti-terrorism court has remanded 14 suspects in police custody for two weeks on murder, terrorism charges.

The Human Rights Commission of Pakistan on Friday condemned a village council for ordering the brutal murder of a young woman after she helped a friend to elope.

The woman, believed to be around 16 to 18 years old, was drugged, strangled and her body burnt in a Suzuki van on the orders of the Makol village jirga in northwest Pakistan on April 29—her murder a so-called “honor killing.”

“It is impossible to not be astounded by the brutality and ruthlessness of those who ordered and oversaw the callous mowing down of a young person…in order to satisfy their notions of cultural proprietary,” the independent HRCP said in a statement. “The criminal actions of the jirga must be condemned unreservedly by all those who stand for rule of law and the right to life itself.”

Police have arrested 13 members of the jirga who ordered the murder of the girl. The victim’s mother was also arrested, a police officer said, because she supported the jirga’s decision.

A local anti-terrorism court on Thursday remanded the 14 suspects in police custody for two weeks on murder and terrorism charges.

Hundreds of women are murdered by their relatives in Pakistan each year on the pretext of defending family “honor,” but it is rare to hear of those who facilitate elopements being killed as well.

Pakistan amended its criminal code in 2005 to prevent men who kill female relatives escaping punishment by pardoning themselves as an “heir” of the victim. But it is left to a judge’s discretion to decide whether to impose a prison sentence when other relatives of the victim forgive the killer—a loophole that critics say remains exploited.

All these criminals should be tied to a poll and burned alive and as they burn they should be beheaded to send a clear message to others.