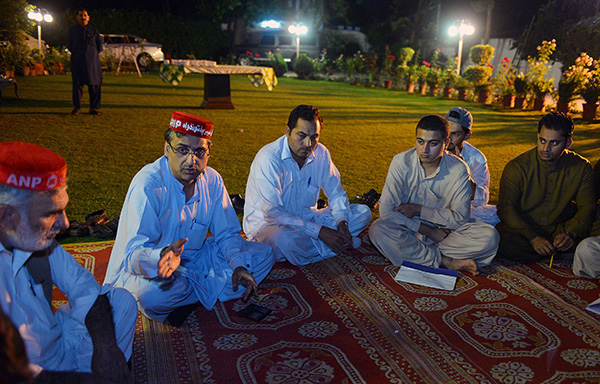 Nongovernmental organization warns that May 11 polls may be compromised if political parties cannot campaign freely.

Pakistan’s caretaker government should ensure the safety of candidates and political party activists at risk of militant attacks ahead of general elections on May 11, Human Rights Watch said in a statement on Monday.

The interim government should also facilitate election campaigning by political parties targeted by the Taliban by providing adequate security for rallies and campaign meetings, it said. It should redeploy civilian law enforcement to sensitive areas, particularly in Balochistan, Sindh, and Khyber-Pakhtunkhwa provinces, says HRW, adding that the Army should provide security in a nonpartisan manner wherever necessary.

Since April 21, the Taliban and other armed groups have staged over 20 attacks on political parties, killing 46 people and wounding over 190, according to HRW. A separate AFP tally, which measures elections-related attacks from April 11, cites the total number of people killed at over 50.

“Pakistan’s interim government should use law enforcement agencies and, if essential, the Army, to provide as much protection as possible to candidates and political parties from Taliban attacks,” said Ali Dayan Hasan, HRW’s Pakistan director. “Unless the government, the country’s independent Election Commission, and security forces ensure that all parties can campaign freely without fear, the election may be severely compromised.”

A spokesman for the Tehreek-e-Taliban Pakistan told journalists in March that elections were “un-Islamic,” as democracy “only serves the interest of infidels and enemies of Islam.” The Taliban have also warned voters against attending political rallies of the three major coalition partners in the outgoing government—the Pakistan Peoples Party, the Muttahida Qaumi Movement, and the Awami National Party. On April 28, HRW notes, the Taliban reiterated their threat, declaring that it “had decided to target those secular political parties which were part of the previous coalition government.”

There have been numerous deadly attacks targeting political parties throughout April. On April 27, an attack on a PPP election meeting in Karachi killed three and injured another 20.  On April 25, two people were wounded in a grenade attack on a PPP election office in Noshki, Balochistan, and eight were killed in attacks in Karachi for which the Taliban took responsibility. On April 24, a bomb attack near the home of a politician from the PPP injured three people in Peshawar.

The Karachi-based MQM party shut down its election offices in protest after an April 23 attack on an election office killed five and wounded 15 party activists. Despite this protest, two more people were killed and over 25 injured in bomb attacks targeting the MQM election office in Karachi’s Orangi Town area on April 27. Earlier, MQM candidates Fakhrul Islam and S. M. Shiraz were killed on April 10 and April 11, respectively. The Taliban claimed responsibility for these attacks, prompting the party to halt all major rallies and only campaign door-to-door.

In Balochistan, the home of ANP chief Malik Baloch was attacked on April 21, while two party activists were killed in Pishin after an election rally was targeted. On April 28, a child was killed and five people injured in an attack on an independent candidate’s election meeting in Quetta. Between April 23 and April 25 there were eight bombings in Quetta attributed to the militant group Lashkar-e-Jhangvi, a Taliban affiliate. On April 23 alone, four attacks killed six people and wounded at least 45 in the city. Jhangvi claimed responsibility for these attacks, one of which targeted Abdul Khaliq Hazara, leader of the Hazara Democratic Party, who was not harmed.

On April 15, a bomb attack targeting Sanaullah Zehri, the candidate of the Pakistan Muslim League (Nawaz) in Khuzdar, Balochistan, killed four, including three members of his family. Twenty-five others were wounded. Zehri accused Baloch nationalists for the attack.

“Since the end of military rule in 2008, Pakistan’s political parties have displayed an impressive commitment to cementing democratic and constitutional rule,” HRW’s Hasan said. “It would be a tragedy if a combination of militancy and the government’s failure to ensure security compromises the elections and sets back Pakistan’s progress toward regular, free, and fair elections in which all Pakistanis can participate.”