Hugh Laurie Gets Star on Hollywood Walk of Fame 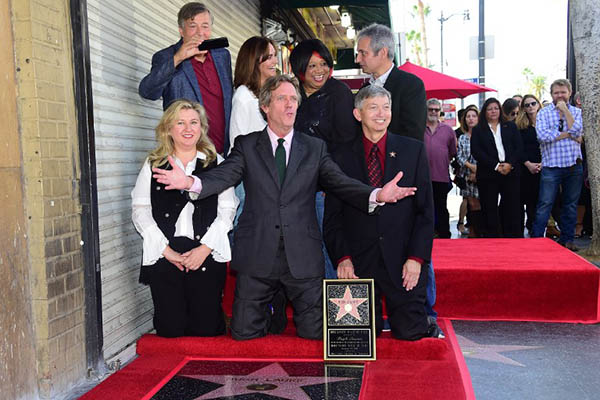 Hugh Laurie, the British comedian and star of The Night Manager, House and numerous movies, cemented his place among entertainment’s elite on Tuesday with a star on Hollywood’s Walk of Fame.

“It isn’t a fair world, and my confession is that I’m 57 now and I’ve lived a life of extraordinary good fortune from start to finish, so much so that almost every day I’m anticipating the piano falling on my head to redress the balance,” he said.

He praised the United States for inventing jeans, pizza and the martini, which he described as “a sonnet in a glass.” While numerous Hollywood stars have spoken out against Republican presidential nominee Donald Trump, Laurie used the opportunity for a joke at the expense of 2012 GOP candidate Mitt Romney.

“The rest of the world craves and covets and consumes these things largely because they’ve seen them in entertainment… I enjoy pizza because Louis C.K. eats pizza at the beginning of every show, every week,” he said. “I love martinis partly because Frank Sinatra drank martinis. I don’t wear jeans partly because I saw Mitt Romney wearing jeans once.”

Laurie won consecutive Golden Globes in 2006 and 2007 for House and has seven Emmy nominations, although he has never won. At one time the highest paid actor on television, Laurie, a father of three grown up children, has credits for producing and directing, as well as a novel under his belt, and a flourishing career as a blues and jazz musician.

Born in Oxford, England, he began performing comedy at Cambridge University alongside Fry, Emma Thompson and Tilda Swinton after a bout of glandular fever cut short his ambitions to follow his father into the Olympic rowing squad.

Laurie and Fry wrote the 1981 Cambridge Footlights annual revue, The Cellar Tapes, which propelled them to London’s West End, and the duo went on to star in a number of groundbreaking British television shows including A Bit of Fry and Laurie, Blackadder, and Jeeves and Wooster.

Laurie’s big break in the United States came with his role as the acerbic Dr. Gregory House on the 2004-2012 Fox drama House, which brought him six Emmy nominations. Laurie also received a nod for his work in the AMC miniseries, The Night Manager, while his film credits include Tomorrowland, Sense and Sensibility, The Man in the Iron Mask and Stuart Little.

He is an accomplished singer and musician, having released two of the highest-selling blues albums of all time, and touring extensively with his group The Copper Bottom Band.

Laurie, sporting a business suit and socks patterned with Britain’s Union flag, spoke of the privilege he felt to be part of an industry, which, while at times trivial, could touch and even shape people’s lives across the world. “I have lost count of the number of young people I have met who are either studying or practicing medicine because they saw House,” he said.

Trump ‘Prepared’ to Force Shutdown for Over a...