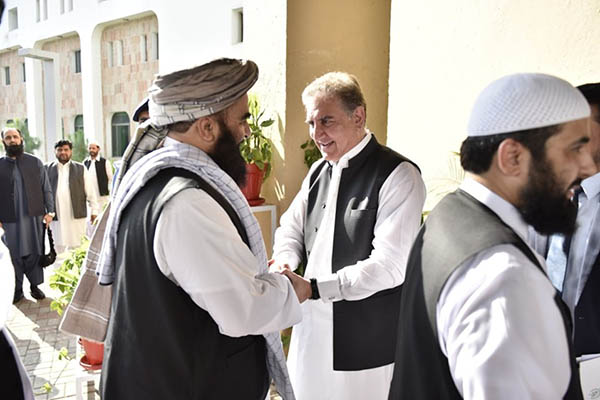 Senior members of Afghanistan insurgents are in Islamabad, where foreign minister Qureshi has called for resumption of peace talks

A group of senior Taliban were warmly welcomed by Pakistani officials as they arrived in Islamabad on Thursday, where the foreign minister called for a resumption of talks with the U.S. on the war in Afghanistan.

Pakistan was one of only three countries to recognize the Taliban regime, and its military establishment is widely alleged to back the bloody insurgency in Afghanistan. Islamabad has repeatedly denied the accusation.

Pakistan has helped facilitate talks between the Taliban and Washington in Qatar over the past year seeking an agreement paving the way for a U.S. troop withdrawal from Afghanistan in return for various security promises from the insurgents. The two sides were on the brink of a deal—with an announcement widely expected to be imminent—when U.S. President Donald Trump abruptly declared the process “dead” last month, citing Taliban violence.

The Taliban threatened more attacks, but both the insurgents and the U.S. left the door open for negotiations to resume—with most experts agreeing Washington will have to return to the table eventually.

Islamabad wants the talks to resume “to smooth the path for a durable, long-lasting peace and stability in Afghanistan,” Qureshi was quoted as saying in the statement. “War is not a solution to any problem. Talks are the only and positive solution to establish peace in Afghanistan,” he continued.

The visit came as Zalmay Khalilzad, who headed the U.S. negotiating team in Doha across the table from Baradar, also visited Islamabad this week, though it was unclear if he was still in Pakistan on Thursday.

The U.S. Embassy in Islamabad has said only that Khalilzad was visiting Pakistan “this week,” while the State Department did not confirm his travel dates.

The Taliban’s Doha-based spokesman, Suhail Shaheen, told AFP on Wednesday that the simultaneous visits to Pakistan were a “coincidence.” But when asked whether there was any possibility of the insurgents meeting Khalilzad, he replied: “Why not? It depends on the Americans.”

The Taliban are still ready to sign the agreement, which Khalilzad and Baradar had hashed out in Doha, he said. “We stand for it. The Americans have backtracked and they will have to take the initiative.”

Baradar was the most high-profile Afghan Taliban leader detained by Pakistan following the 9/11 attacks in 2001. He was released from prison last October and appointed to head the insurgent’s political office in a move seen as a tentative effort to aid the talks.

The Taliban have said that the Pakistan visit is the fourth leg of a tour that included Russia, China and Iran. A Taliban commander told AFP that Baradar and the 11 other militants would spend four days in Pakistan.