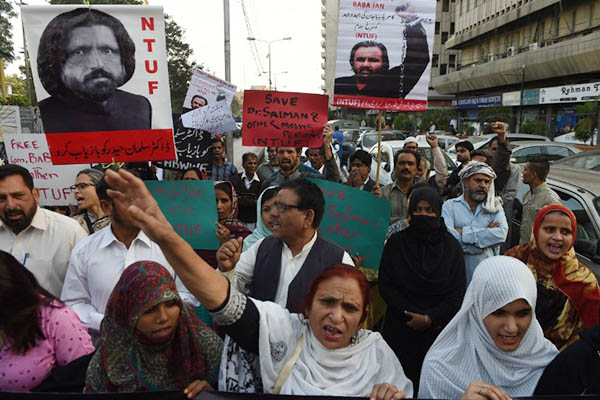 The statement came as leftwing and liberal activists prepared to hold protests throughout the country demanding the bloggers’ release.

The missing men are Salman Haider, a poet and academic, and bloggers Waqas Goraya, Aasim Saeed, and Ahmad Raza Naseer. The four went missing from various cities between Jan. 4 and Jan. 7.

Pakistan is routinely ranked among the world’s most dangerous countries for journalists, and reporting critical of security policies controlled by the powerful military is considered a major red flag, with reporters at times detained, beaten and even killed. Rights groups say Pakistani activists and journalists find themselves routinely caught between the country’s security establishment and militant groups including the Taliban.

“The Pakistani government has an immediate obligation to locate the four missing human rights activists and act to ensure their safety,” said Brad Adams, Asia director at Human Rights Watch. “The nature of these apparent abductions puts the … government on notice that it can either be part of the solution or it will be held responsible for its role in the problem.”

The interior ministry said over the weekend it will investigate the disappearance of Haider, but made no reference to the others. A security source has denied intelligence services were involved in the disappearances.

Liberal activists were set to hold protests in major cities on Tuesday afternoon, using the hashtag #RecoverAllActivists to generate support on social media.

Dawn, the country’s leading English-language daily, meanwhile issued a strongly-worded editorial. “The sanitized language—‘missing persons,’ ‘the disappeared,’ etc—cannot hide an ugly truth: the state of Pakistan continues to be suspected of involvement in the disappearance and illegal detentions of a range of private citizens,” it said. “It is simply not enough for government and police officials to claim that the disappearances are being investigated. Mr. Haider and the other recently missing activists need to be returned to their families immediately.”

Pakistan is routinely ranked among the world´s most dangerous countries for journalists, and reporting critical of security policies controlled by the powerful military is considered a major red flag, with reporters at times detained, beaten and even killed.