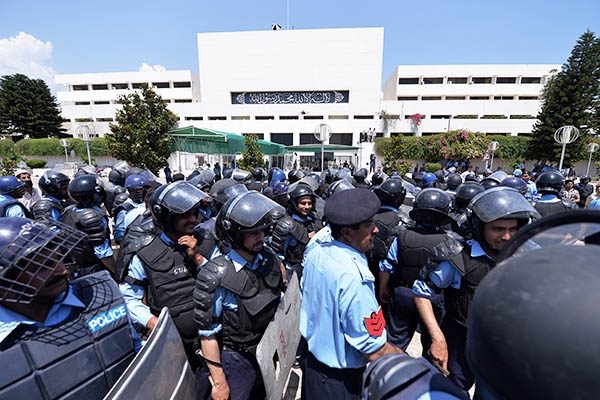 The new law doubles the maximum sentence for terror offences to 20 years and allows security forces to hold suspects for up to 60 days without disclosing their whereabouts or allegations against them.

HRW said the new law could be used to suppress peaceful political opposition and criticism of government policy. “This vague and overbroad counterterrorism law gives a green light for abusing suspects in detention, which is already far too common in Pakistan,” said Phelim Kine, deputy Asia director at Human Rights Watch, in a statement. “Prime Minister Nawaz Sharif … should ensure that this law is replaced by one that ensures the protection of basic rights in the fight against terrorism.”

The legislation, passed as the military fights a major offensive against Taliban and Al Qaeda linked militant hideouts in North Waziristan, was watered down from its initial form. Originally the law would have allowed detention for 90 days and permitted security forces to open fire on anyone they see committing or “likely to commit” terror offences. Now officers can only shoot suspects as a “last resort.”

HRW said the new law would violate fundamental rights enshrined in the International Covenant on Civil and Political Rights, which Pakistan ratified in 2010. The New York-based campaign group said the bill was an improvement on the original ordinance issued last year, but was still vague and could be used to stifle peaceful political protests.

The independent Human Rights Commission of Pakistan (HRCP) described it as an attack on fundamental rights. “The HRCP is appalled at the failure of parliament to block the passage of the Bill, a draconian legislation to the core,” HRCP spokesperson Zohra Yusuf said in a statement.

The government introduced the legislation in a bid to curb the violence and instability blighting Pakistan. The nation has been in the grip of a homegrown Taliban insurgency since 2007, with more than 6,800 people killed in bomb and gun attacks, according to an AFP tally. Pakistan also faces a violent separatist movement in Balochistan province and rising sectarian violence.