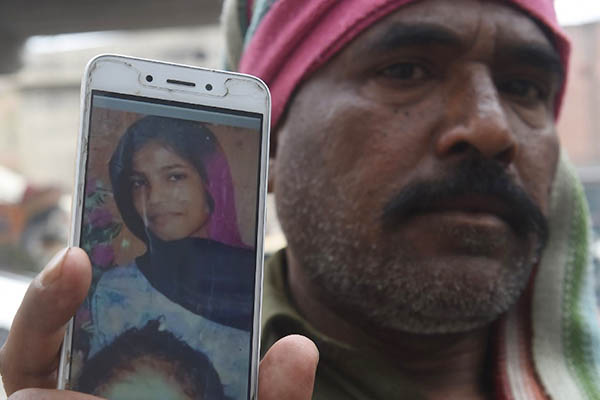 Muhammad Riaz, father of 16-year-old Uzma, a maid who was found dumped in a city canal, shows her picture on a smartphone. Arif Ali—AFP

The battered body of 16-year-old servant Uzma Bibi was found dumped in a canal and her wealthy employer charged with murder, the latest case highlighting the dangers domestic workers—especially children—face in Pakistan.

Police said Uzma died after blows to the head with a kitchen utensil. She had been working for the family in Lahore for eight months when she was killed in January this year. Her employer and two other women remain in custody as a police investigation into the murder and allegations of mistreatment drags on.

“I will not give up, I prefer death, I will not let them go, I want to see them pay for what they did,” Uzma’s distraught father, Muhammad Riaz, said.

In Pakistan, 8.5 million domestic workers—including many children—labor for wealthier families according to the International Labor Organization (ILO). “Parents often see their children as a way to lift their families out of poverty,” explained Arooma Shahzad, general secretary of the Domestic Workers’ Union, the country’s first—and still only—such organization. But domestic workers often face exploitation, violence, and sexual abuse. Pakistan’s patriarchal culture, with its rigid social class structure, often prevents them from having a voice.

Children are particularly vulnerable, and Uzma’s case is the latest in a growing number of incidents involving minors.

In 2016 a judge and his wife were imprisoned for torturing their 10-year-old maid, while in 2017 a famous TV presenter was charged for forcefully detaining her teenage maid. “Minors who become domestic workers often find themselves in a very vulnerable position, the target of abuse and exploitation by their employers,” warned Shahzad.

Theoretically it is illegal to employ anyone under the age of 15 in Pakistan, but it remains a common practice.

Saba, 15, had to leave school to work as a maid in Lahore. “I do not really have a choice, I have to work in two homes every day [to help] my family,” she said. Her younger sister is expected to follow in her footsteps soon.

Details of Uzma’s murder were sensationally revealed during a popular TV show, during which presenter Mukarram Kaleem made a passionate plea for justice.

The tragic story gave rise to a torrent of outrage on social media with many using the #JusticeforUzma hashtag, and a broader debate on the rights of domestic workers in Pakistan, including children.

For Shahzad, such incidents denote a lack of “humanity.”

“We do not even consider our servants as human beings,” she lamented.

In December 2018, the increasing number of cases of ill-treatment led the parliament of Punjab province to set regulations for the employment of domestic workers, which theoretically grants them rights such as sick leave and holidays.

Lawyer Sheraz Zaka admitted it was only a “first step,” but hopes it will pave the way for more controls and a “better balance” of power.

The law is still in its infancy and does not cover the other provinces of Pakistan. Because servants are often illiterate, many are unaware of such changes to their rights, or unable to insist employers adopt the new rules.

For Kaleem, it is urgent for Pakistan to re-examine how it treats domestic workers. He said: “People are starting to realize and talk about it. There is more awareness among people that it is not the way to treat servants, and that they have to change their ways.”