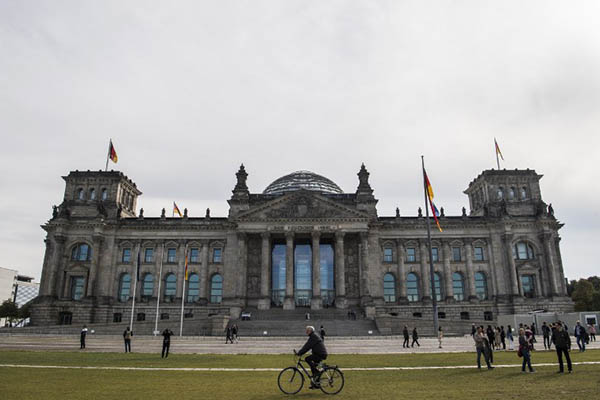 German Chancellor Angela Merkel huddled with her party on Monday after winning a fourth term with a far weaker score, now facing the double headache of an emboldened nationalist opposition party and thorny coalition talks ahead.

If the campaign was widely decried as boring, its outcome was a bombshell—a populist hard-right surge poached votes from Merkel’s conservatives as well as the center-left Social Democrats, handing both their worst results in decades.

“A nightmare victory for Merkel,” said Germany’s top-selling daily Bild. “The governing parties and the chancellor squandered the people’s faith in them.”

After 12 years in power and running on a promise of stability and economic strength, Merkel’s CDU/CSU bloc scored 33 percent, according to final results, against 20.5 percent for the Social Democrats under challenger Martin Schulz, who pledged to go into the opposition.

The election marked a breakthrough for the anti-Islam Alternative for Germany (AfD), which with 12.6 percent became the third strongest party and vowed to “go after” Merkel over her migrant and refugee policy. Newsweekly Der Spiegel said Merkel had no one but herself to blame for the bruising she got from voters.

“Angela Merkel deserved this defeat,” the magazine’s Dirk Kurbjuweit wrote, accusing her of running an “uninspired” campaign and “largely ignoring the challenges posed by the right.”

The entry of around 90 hard-right nationalist M.P.s to the glass-domed Bundestag chamber breaks a taboo in post-World War II Germany. “We will take our country back,” vowed the AfD’s jubilant Alexander Gauland, who has recently urged Germans to be proud of their war veterans and said a government official who is of Turkish origin should be “dumped in Anatolia.”

While joyful supporters of the AfD—a party with links to the far-right French National Front and Britain’s UKIP—sang the German anthem at a Berlin club late on Sunday, hundreds of protesters shouted “Nazis out!” But just hours after its triumph, the party’s long-simmering infighting between radical and more moderate forces spilled out into the open at a dramatic morning news conference.

AfD co-leader Frauke Petry stunned her colleagues by saying she would not join the party’s parliamentary group and would serve as an independent M.P. She then abruptly left the room in a move Gauland criticized as “excessively feisty.”

Political scientist Suzanne Schuettemeyer of the University of Halle in eastern Germany said despite it remaining an opposition party, the AfD’s presence in parliament would harm Germany’s image abroad. “It’s Germany and it will change the way we are perceived, because AfD will speak a language that we thought we had overcome, that was outside of our political consensus,” she told AFP.

All other political parties have ruled out working with the AfD, whose leaders call Merkel a “traitor” for allowing in more than one million asylum seekers since the height of the refugee influx in 2015. While Germany still digests the rise of the right-wingers, Merkel’s inner circle was preparing for what could be protracted coalition talks with smaller parties.

Merkel vowed to put together a reliable alliance, insisting late Sunday that “the stability of German governments is of the utmost value.” Speaking on public television, she appealed “to all sides to take their responsibilities seriously.”

But the leader of her Bavarian CSU allies, Horst Seehofer, a vocal critic of Merkel’s asylum policy, called the poll outcome a “bitter disappointment” and vowed to close the “open flank” on the right before state elections next year, signaling more trouble ahead.

A humbled Merkel must now find a new junior partner after the Social Democrats (SPD) declared they would go into opposition, to recover the support they lost while governing in Merkel’s shadow. Schulz, putting a brave face on the defeat, vowed Monday that the 150-year-old traditional workers’ party would be “a strong opposition force in this country, to defend democracy in this country against those who question it and attack it.”

This will likely force Merkel to team up with two smaller, and very different, parties to form a lineup dubbed the “Jamaica coalition” because the three parties’ colors match those of the Caribbean country’s flag.

One is the pro-business and liberal Free Democratic Party (FDP), which scored a 10.7-percent comeback after crashing out of parliament four years ago. The other is the left-leaning, ecologist Greens party, which won 8.9 percent on campaign pledges to drive forward the country’s clean energy transition.

Months of horse-trading could lie ahead to build a new government and avert snap elections. But the FDP’s leader Christian Lindner has pointed to new “red lines,” voicing skepticism especially on French President Emmanuel Macron’s plans for a single eurozone budget, which Merkel has cautiously greeted.

The Greens, meanwhile, sharply differ with the FDP and CSU on key issues from immigration to the environment, pushing to expand wind farms, phase out coal and take to task carmakers over the “dieselgate” emissions cheating scandal.