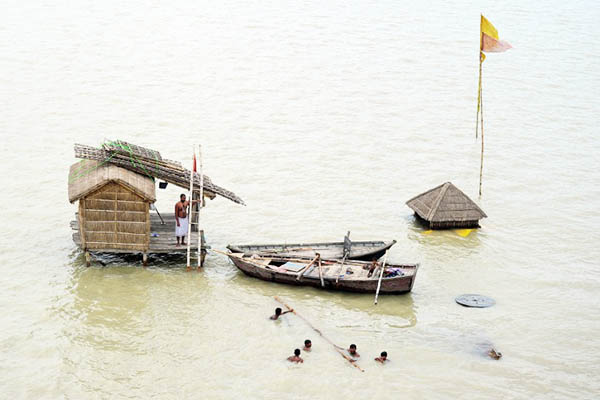 Death toll in Pakistan has crossed 115, while over 120 people have died in neighboring India.

Monsoon rains have claimed the lives of hundreds of people across Asia, authorities said Monday, as rescue workers scrambled to reach remote areas of India, Pakistan and Myanmar in the wake of flash floods and landslides.

Pakistan, which has suffered deadly floods around the same time every year since 2010, when the country was struck by the worst inundations in its history, has seen 116 people die so far. Ahmed Kamal, spokesman for the National Disaster Management Agency told AFP that over 850,000 people had been affected by this year’s floods.

Authorities in India say more than 120 people have died across the country in recent days, while more than a million have been displaced by rains worsened by a cyclone that barreled through the Bay of Bengal last week. On Monday rescuers resumed their search for villagers after downpours caused a landslide in remote northeastern Manipur, where an official said four bodies have been recovered from a hamlet buried by a collapsed hill.

In neighboring Myanmar the belt of heavy seasonal rains, augmented by Cyclone Komen, has killed 46 people so far and affected more than 200,000 with much of the country languishing under rooftop-high floods. The government there has focused relief and rescue efforts on four “national disaster-affected regions” in central and western Myanmar, where villagers have been forced to use canoes and makeshift rafts to escape the rising waters.

Thousands of others are already in camps for the displaced including in Kalay, Sagaing Region, where residents told of unusually powerful flood waters swamping homes in hours. “We’ve lost all that we have. Our house is still under water,” Htay Shein, 62, told AFP from a temporary shelter in Kalay. “We have seen floods, but never anything like this before. This year is the worst.”

An AFP photographer in the area said floodwaters remained stubbornly high on Monday, with many people making their way to safety in rafts cobbled together from old tyres, salvaged wood and large plastic bottles.

The United Nations warned swollen rivers threaten more areas of the country, adding it could be days before the true extent of the disaster emerges. “Logistics are extremely difficult. Assessment teams are having a hard time reaching affected areas,” said Pierre Peron, Myanmar spokesman for the United Nations Office for the Coordination of Humanitarian Affairs.

Landslides in Chin state, south of Sagaing, have destroyed 700 homes in the state capital Hakha, according to the state-run Global New Light of Myanmar. President Thein Sein has promised the government will do its “utmost” to provide relief, but said parts of Chin had been cut off from surrounding areas, the report added.

Rains have also battered the western state of Rakhine which already hosts about 140,000 displaced people, mainly Rohingya Muslims, who live in exposed coastal camps following deadly 2012 unrest between the minority group and Buddhists.

The annual monsoon is a lifeline for farmers across the region but the rains and frequent powerful cyclones that usher them in can also prove deadly. Poor infrastructure and limited search and rescue capabilities routinely hamper relief efforts across the region, more so as roads, phone lines and electricity are knocked out by rising waters.

India, which receives nearly 80 percent of its annual rainfall from June to September, sees tragedy strike every monsoon season. This year West Bengal has been hit hard with 48 people killed, according to state management minister Javed Ahmad Khan. “More than 1.8 million people in 5,600 villages have been affected by the flooding… nearly 1.1 million have been moved to camps,” said Khan. “If there are no rains, the water level will come down in the next few days,” he added.

Dozens have also perished in Nepal and Vietnam following floods and landslides. In Vietnam toxic mudslides from flood-hit coal mines in the northern province of Quang Ninh, home to the UNESCO-listed Halong Bay tourist site, claimed the lives of two families and spewed coal into town centers.