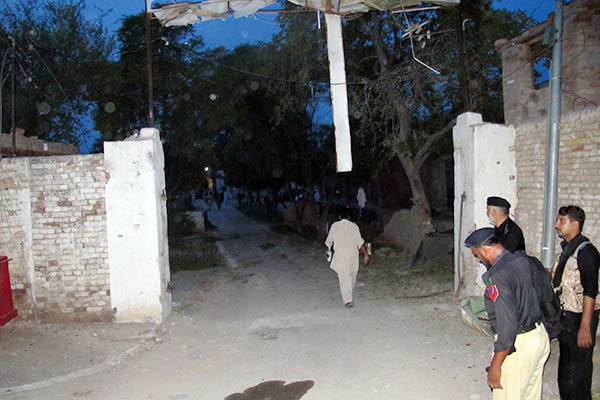 Taliban insurgents freed hundreds of prisoners including hardline militants in a brazen assault on a jail in northwest Pakistan that was bombarded with mortars and rocket-propelled grenades, officials said Tuesday.

At least 13 people including six police, four prisoners and two attackers were killed and eight others injured in the overnight assault that triggered a three-hour gunbattle between security forces and militants disguised in police uniforms.

“A total of 248 prisoners escaped,” inspector-general jails in Khyber-Pakhtunkhwa, Khalid Abbas, said, adding that police had recaptured six. “Around 30 of the escapees are believed to be hardcore militants and were being tried in antiterrorism courts,” he said. After the battle abated, security forces searched the prison and counted inmates by flashlight to determine how many had escaped, he said.

The attack targeted the Central Prison in Dera Ismail Khan, a city in Khyber Pakhtunkhwa province close to the lawless tribal regions bordering Afghanistan. The British-era prison held up to 5,000 prisoners, including around 300 militants involved in attacks on security forces and sectarian killings, a security official said.

Witnesses said over 150 militants, mostly dressed in police uniforms, attacked the jail at 11:20 p.m. “There were at least two suicide bombers,” said Inspector-General Abbas. “They blew up the electricity transformers, plunging the jail into complete darkness ahead of their attack.”

According to Qasim Khan Khattak, adviser to the prison ministry in Khyber-Pakhtunkhwa, this was instrumental in helping the militants complete their attack. “The biggest problem for the security forces was that the militants were wearing police uniforms. There was also complete darkness so they were unsure who they could or could not fire on,” Khattak added.

Mushtaq Jadoon, deputy commissioner of Dera Ismail Khan, told journalists around 50 to 60 militants had managed to enter the jail as others fired rockets from outside. “First they destroyed a police armored vehicle parked at the front gate,” he said, adding that two policemen were killed in the initial rocket attack. He said one attacker was shot as he tried to run away. “Police killed one militant who was trying to flee and who opened fire on police near the jail,” he said.

Abbas told Newsweek the militants had planted explosive devices in the jail while escaping, which had later been defused by bomb disposal squads. “Police and other law enforcing agencies have cleared the jail,” confirmed Jadoon, adding that a curfew had been imposed in the city and all residents had been directed to stay in their homes.

The Taliban have claimed responsibility for the jail attack.

“Some 150 fighters, including a suicide bomber squad of seven people, attacked the Central Prison,” Shahidullah Shahid, the new spokesman of the Tehreek-e-Taliban Pakistan, told Newsweek. “Our aim was to free the prisoners and the Taliban managed to secure the release of at least 300,” he added.

A Taliban source, requesting anonymity as he is not authorized to speak to the media, said: “The plot was hatched by Adnan Rasheed and he has been given additional charge to organize more such successful attacks to free inmates from jail and the custody of security forces.”

Rasheed, an ex-Pakistan Air Force cadet who was part of a plot to assassinate former Pakistan president Pervez Musharraf, was freed from Bannu Prison in April 2012 by a similar Taliban attack.

A security official in the city said militants arrived in more than a dozen vehicles and that among the escapees were two Taliban commanders. “Militants also torched jail records and an office,” the official said, requesting anonymity as he was not authorized to talk to media.

Residents in Dera Ismail Khan reported hearing loud blasts and gunfire, and said the electricity supply to several parts of the city had also been suspended.

A local police official said he saw militants carrying rocket launchers and firing at the jail. “Militants were firing rockets at the jail and I also heard gunfire from inside the building,” the official told AFP, speaking on condition of anonymity.

Shaukat Yousafzai, spokesman for the Khyber-Pakhtunkhwa provincial government, confirmed the Army had been called in to quell the militant attack. “The incident might be a continuation of the current wave of terrorism sweeping the province,” he added.

In a reminder of the enormous security challenges facing Pakistan, the violence broke out just hours before the nation’s lawmakers began voting for the country’s new president. The new head of state will replace outgoing President Asif Ali Zardari, who is ending a five-year term. His party, the Pakistan Peoples Party, lost May’s general elections and his successor is likely to be Mamnoon Hussain, a close ally of Prime Minister Nawaz Sharif, whose Pakistan Muslim League (Nawaz) currently rules in the center.