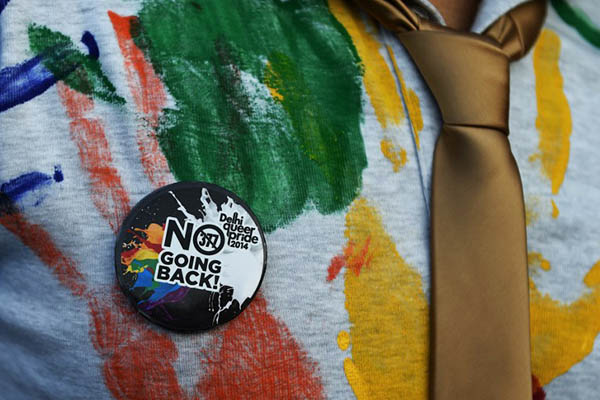 Hundreds of gays and lesbians marched through the streets of New Delhi on Sunday, the first pride parade since the Supreme Court reinstated a colonial-era ban on gay sex.

Wearing rainbow wigs and waving colorful flags and posters with messages such as “All love is equal,” members of the community and their supporters marched to celebrate their sexual freedom and to ask others to understand. This was the first pride march in New Delhi since the court’s ruling in December last year, but marches have also been held in Bangalore and Mumbai.

One of the organizers, Shiv Sahu, said there was anger about the Supreme Court ruling which marchers branded a violation of equality. “There is a lot of frustration, but we are not going back to the closet,” said Sahu, 37, who wore a rainbow-colored turban. He said several members of the gay community had filed petitions to the top court asking for a review of the order criminalizing gay sex.

Gay sex had been effectively legalized in 2009 when the Delhi High Court ruled that a section of the penal code banning “carnal intercourse against the order of nature” was an infringement of fundamental rights. Last year, the Indian Supreme Court struck down the 2009 ruling, saying responsibility for changing the 1861 law rested with lawmakers and not the courts.

Anjali Gopalan, founder of AIDS awareness group Naz Foundation, said the two conflicting verdicts had left the gay community feeling insecure and vulnerable. “The courts have literally asked people to go back into the closet after coming out,” said Gopalan, whose group led the 2009 case.

While gay rights groups say the law is rarely used to prosecute homosexual acts, they add that police do use it to harass and blackmail members of their community. Surveys show widespread disapproval of homosexuality in India, obliging many gay men and women to live double lives.

Hindu rightwing groups have been especially vocal about their dislike of same-sex couples, calling such relationships a disease and a Western cultural import. “It is against nature, it is against the values and against the heritage of the country,” said Vinod Bansal, a spokesman for the Vishva Hindu Parishad or World Hindu Council, ahead of the march.