Hundreds of Opposition Activists Arrested Ahead of Dharna 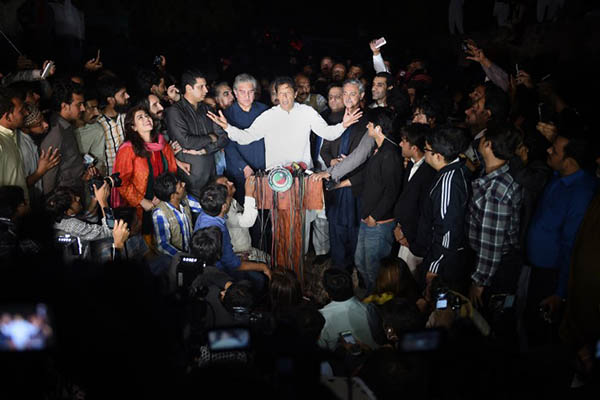 Police over the weekend arrested hundreds of supporters of opposition politician Imran Khan who attempted to enter the federal capital days before a planned protest shutdown of the capital, according to the interior minister and senior police officials.

Prime Minister Nawaz Sharif is under growing pressure from opposition parties, mainly Khan’s Pakistan Tehreek-e-Insaf (PTI), over his children’s offshore bank accounts which were revealed in the Panama Papers leak.

Khan, a former cricketing hero, has threatened to “lock down” Islamabad on Wednesday to force Sharif to accept an inquiry into the affair. The new protest plan comes at a sensitive time for Sharif, with the Supreme Court due to start hearing a case about the Panama Papers revelations on Tuesday.

“About 450 people entered Islamabad today,” Interior Minister Chaudhry Nisar Ali Khan told a press conference. “Police intercepted them but most of them ran away, many leaving their cars behind. Police arrested more than 100 of them.” A senior police official in Punjab province said that around 690 PTI supporters had been arrested from across the province over the weekend as they attempted to reach Islamabad for the protest.

“They want to occupy the Pakistan Secretariat and the plan is not to allow government employees to enter,” he said. The minister said that on Saturday night some 1,200 PTI activists tried to drive in convoy to Islamabad from Peshawar. When police stopped them on the motorway they beat up officers but had to retreat when reinforcements arrived.

Police have cordoned off his residence and fired tear gas during clashes there with his supporters on Sunday, an AFP photographer said.

In summer 2014 Khan led a mass protest that lasted four months. He allied himself with populist cleric Tahirul Qadri to stage a sit-in outside Parliament calling for the government to resign over vote-rigging allegations. Khan called off the protest in December 2014 after Taliban militants stormed an Army-run school in Peshawar and killed 154 people, most of them children.