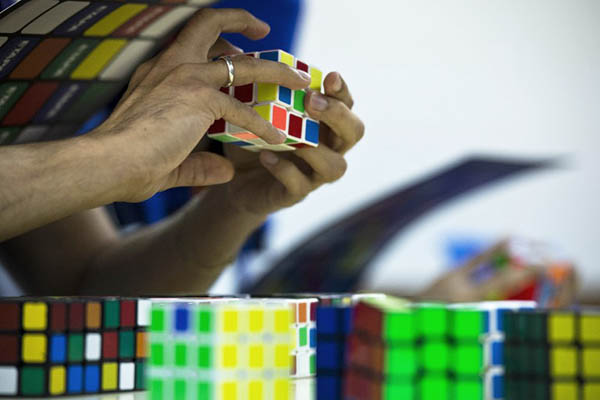 Hunor Bozsing says he got lucky eight years ago: searching for an old toy in his house in Budapest, instead he stumbled across a Rubik’s Cube—a twist of fate that launched him to international fame.

The 19-year-old found himself surrounded by youngsters taking selfies after a demonstration Thursday. He was six when he saw his first Rubik’s Cube, he told AFP. At the time, he could only solve one side.

“Later, when I was 11, I was searching for an old toy in our house but luckily I could not find it and instead I found a Rubik’s Cube…I decided to solve it. I mean the whole thing.”

Bozsing said he spent two months trying to crack the puzzle with the help of the Internet. “Next, I began to be a competitor and solved the Cube in 15, 20 seconds,” he said—inspired by online videos of others racing to finish the puzzle in record time.

In Islamabad, he greeted a would-be future competitor: 12-year-old Ghayyur Khan, whose solution was met with applause from approving students. “It was my cousin who taught me how to solve it,” Khan told AFP. “He used to make it in two minutes but I am beating him now. I started three months ago and now my time is one minute, 30 seconds.”

Rubik’s Cube was invented in 1976 by Hungarian sculptor and architecture professor Erno Rubik. As of January 2009, 350 million Cubes had been sold globally, making it the world’s top-selling puzzle game, according to the Hungarian embassy in Islamabad.