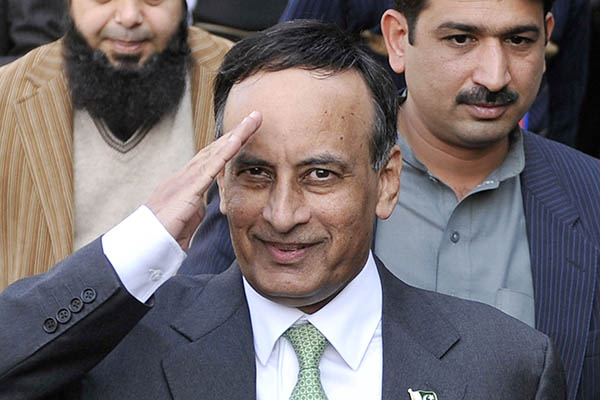 In his new book, Haqqani writes both countries have failed to understand each other.

Speaking on Monday at the launch of his new book, Magnificent Delusions, Husain Haqqani, Islamabad’s former ambassador to Washington, called on Pakistan to focus less on defense and regretted that decades of U.S. aid had made the Pakistani military “stronger.”

“That is what has caused the internal dysfunction in Pakistan because the military has continued to become stronger,” he said. “It has helped build Pakistan’s national narrative. Pakistanis never pause to think what our resource base is capable of supporting.”

Haqqani, who lost his post in 2011 following the Memogate scandal, also argued that the U.S. and Pakistan have always failed to understand each other. “A nation with nuclear weapons should not behave like a guy who keeps buying guns because he says he needs to defend his family and then stays up all night because he’s afraid somebody will come and steal his guns—and then further down has a heart attack because of high blood pressure that he suffered from staying up,” he said. “The American delusion is if [they] give Pakistan enough assistance, they will not want to pursue their objective—which is totally upside down, because what you are doing is encouraging the whole process.”

Haqqani said Islamabad-Washington relations could be transformed next year when U.S.-led troops begin withdrawing from Afghanistan. He called for Pakistan to refocus on fighting widespread poverty and illiteracy and to combat a creeping “ideological nationalism, that being Pakistani equals being ‘Islamic.’” “We can only survive as a pluralist state, like other nations, and that, I think, is not happening,” he added, voicing fear that religious minorities faced an “uphill battle” for survival in Pakistan.

Haqqani also called for Pakistan to embrace Malala Yousafzai, the schoolgirl shot by the Taliban, as a hero rather than figures such as nuclear scientist Dr. A. Q. Khan or militant leader Hafiz Saeed, “who has nothing to offer Pakistanis except prejudice, bigotry, violence, and terrorism.”

Hussain Haqqani did not mean to malign father of the nation but those are criticizing ex-ambassador are responsible for character assassination of Father of this nation. Bringing facts to the people did not mean that you are maligning someone. Infact the problem is with those people who are underscoring such controversial things and taking them to wrong side. You can derive any meaning from any writing and fault of this does not go the writer but to those who interpret it.