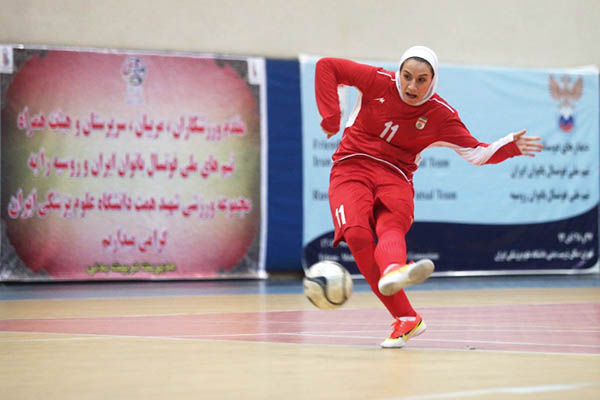 Niloofar Ardalan appeals to authorities to change rules to permit women to travel outside Iran without male guardian’s permission.

An Iranian women’s football team will be minus its captain at the Asian championship in Malaysia next week after her husband invoked his right under Islamic law to bar her from traveling.

Mehdi Tutunchi, himself a sportscaster, said his wife Niloofar Ardalan could not lead out the national team at the Sept. 21-26 championship in Nilai, because it coincided with their seven-year-old son’s first day at school.

Ardalan went public to plead her right to represent her country at the first women’s tournament of futsal—a form of five-a-side football—organized by the Asian Football Confederation, in a case that captivated Iran’s social media. She appealed for a change to the law, in force since the Islamic revolution of 1979, which bars women from leaving home, let alone the country, without the permission of their male guardian.

“I wish authorities would pass a law for sportswomen so we can defend our rights in these circumstances,” Ardalan told Iran’s NASIM news agency. “As a Muslim woman I wanted to raise the flag of my country, I wasn’t going there for fun.”

Just as Iranian boys who have not completed their military service get temporary permits to attend sport events abroad, “something must be done for us women too,” she said.

Iranians took to Facebook to express sympathy for Ardalan and condemn her husband’s decision. “To publicize this in Iran… This woman is very brave and selfless,” Atefeh Amin wrote on a women’s rights Facebook page. Another user criticized the husband.

“Mr. Tutunchi, you are depriving a human being of her first right to live her own life. Whatever the reason, you cannot do this,” wrote a user going by the name Samaneh.

But as the outcry intensified, Ardalan backed down, saying it was a private issue and that she was sorry that “anti-revolutionary media” had exploited her case. “I’m a Muslim Iranian woman and my absence from these games is a personal and family matter,” she told NASIM. “I only described my problem and asked for a solution for it,” she said. “It’s no one else’s business.”

Women in Iran are required to wear the Islamic headscarf and are barred from certain activities, such as watching men play sports in stadiums, singing solo at concerts or riding a bicycle on the street. Moderate President Hassan Rouhani, who took office in 2013 on a platform of more social and political freedom, has three women vice presidents.