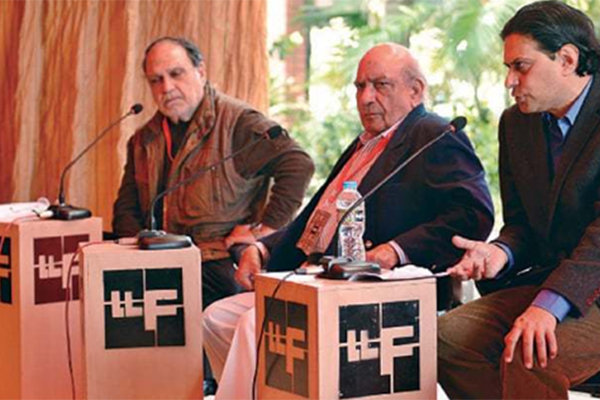 Ibn Abdur Rehman (1930-2021) died on April 12, 2021 at the age of 90 amid sorrow that grew into a nationwide celebration of the greatness of Pakistan’s most distinguished journalist.

Rehman stood up for a secular order his entire life in an increasingly malfunctioning religious state. He was a self-effacing follower of Faiz Ahmad Faiz and Mazhar Ali Khan and worked as a journalist under Faiz’s editorship of Pakistan Times, Lahore’s prestigious newspaper before it was a taken over by the state. He was bilingual, editing Urdu daily Azad during the turbulent fall of East Pakistan, 1970-71, opposing military action, was editor-in-chief of the Pakistan Times from 1988 to 1990.

He didn’t much write about himself, but brief reference is found in some obituaries to his arrival from Indian Punjab to Lahore in 1947 where he studied, and acquired an M.Sc. degree, at F.C. College. He stood up for the rights of non-Muslim minorities, and the apostatized Muslim sects right from the start, despite his status as a migrant from India at Partition. During the decade of General Zia’s military rule he worked as executive director of Mazhar Ali’s Khan’s leftwing weekly Viewpoint.

Rehman wrote ceaselessly to defend social justice, democratic values and human rights in Pakistan under regimes that sought to go against these fundamental values of the modern state in the name of “ideology.” Besides numerous articles and papers, Rehman wrote three books: Jinnah as Parliamentarian (co-editor), Arts and Crafts of Pakistan and Pakistan Under Siege (collection of columns). Pakistan ignored him and failed to feel rebuked when Rehman won the Nuremberg International Award for Peace and Human Rights in 2003—together with Indian journalist Teesta Setalvad for their “exemplary fight” for peace and human rights despite personal risk—and the Magsaysay Award for Peace and International Understanding in 2004. At 72, Rehman became director of the independent Human Rights Commission of Pakistan in 1990.

Rehman once recalled the findings of a survey of the print media in India and Pakistan conducted in 1988, with which he was associated: “We came to the conclusion that unless it was a disaster story, in India or Pakistan, it wasn’t likely to be reported in the other country.” He was revered by some in Pakistan and was accepted as a fair commentator in India, too, but he knew that while Pakistan’s journalism was handicapped by ideology, the Indian press, too, was not free of prejudice. He believed that “the media today is being run by managers, and not the professional editors.” He asked the question: “Is it possible in India and Pakistan to work out something in the field of media so that the civil society gets a fair deal?” He believed that Pak-Indo rivalry had tilted journalism on both sides in the wrong direction, missing what he called “South Asian perspective.”

Recently, Rehman took the Pakistan government to task when Prime Minister Imran Khan first invited world-renowned economist Atif Mian to come and set Pakistan’s wobbly economy right, and then, tail-between-legs, dis-invited him because he was a “Qadiani.” I.A. Rehman wrote: “The government should not talk to the IMF or the World Bank until they find good Muslims by Pakistan standards to make their decisions. No book should mention Professor Abdus Salam’s winning the Nobel Prize as a son of Pakistan, nor General Akhtar Husain Malik’s dash to Chamb in the 1965 war, nor General (then Brigadier) Abdul Ali’s role in the greatest tank battle at Chavinda. The discourse of the absurd has no end.”

The soft side of Rehman came to the fore when he wrote an epitaph column on fellow-journalist Munnu Bhai who died in 2018: “I can better recall my association with Munnu Bhai from 1970 onwards when both of us were working for Pakistan Times of the Progressive Papers Ltd. The information minister in Yahya Khan’s government, Gen. Sher Ali Khan, could not bear the barbs Munnu Bhai shot at the regime and ordered his transfer to the Multan office of Imroze. I also discovered Munnu Bhai as one of the Cambellpur (now Attock) cavaliers through Malik Mohammad Jafar whom I was privileged to get acquainted with while editing his elegantly composed articles for Pakistan Times. Both were rationalist, reformist nationalist young men who were sharpening their wits under the guidance of Dr. Ghulam Jilani Barq, the author of Two Qurans, and Prof Ashfaq Ali Khan, who wanted Pakistan to become a strong world power by establishing a steel mill.”

His comment on the PTI government of Imran Khan had to be critical because of the eccentric conduct of the state by the Prime Minister: “The failure to get the finance minister elected to the Senate from Islamabad was a minor setback that a strong government could have taken in its stride. Regrettably, the government deemed it prudent to overreact and unnecessarily sought to prove that the prime minister was firmly in the saddle. There was no point in seeking a vote of confidence from Parliament as nobody had hinted at the government’s loss of such confidence. When the prime minister started attacking the institutions of governance, people were amazed that the defender of these institutions was thoughtlessly cutting the branch of the tree on which the edifice of governance rested.”

Rehman also examined the psychological fallout from the possession of a nuclear bomb by Pakistan in the introduction of a book titled Illusion of Power. In it, he explains that Pakistan’s people have come to believe that the successful acquisition of nuclear capability means that their nation’s security is forever ensured. Meanwhile, the politicians who ordered nuclear tests—and the scientists and government functionaries who helped create the nuclear weapons—have used the mere presence of this nuclear weaponry as the justification for demanding not only public recognition and honor but also the right to unlimited authority for ruling over Pakistan. Consequently, free discussion and honest opinion about nuclear weapons have been nearly prohibited, under the premise that any such talk poses a basic threat to national security.

Former Indian ambassador to Pakistan TCA Raghavan mourned Rehman’s demise: “What a great loss for so many of us personally, for Pakistan and for South Asia. Deeply saddened but also what a life to celebrate and recall.”

The Washington Post published the following obituary: “I.A. Rehman, a Pakistani journalist and human rights activist who spent decades opposing military dictators and fighting for the rule of law and democracy. Mr. Rehman was a strong voice for Pakistan’s religious minorities, including Christians and Hindus. He frequently spoke out against the country’s strict blasphemy law, which carries a potential death sentence, saying that it was often used to settle scores or target minorities and political opponents. ‘Blasphemy has become a political battle,’ he told the New York Times in 2014. ‘It’s no longer just a criminal or religious problem—it’s become a political issue that is used to silence voices and create a climate of fear.’”

Rehman was a true activist, unflinching in his demands of equal rights for all. His passing is a greater loss for Pakistan than many can imagine.