Home Sports ‘I Am Mountain Climbing to Empower Women’

‘I Am Mountain Climbing to Empower Women’ 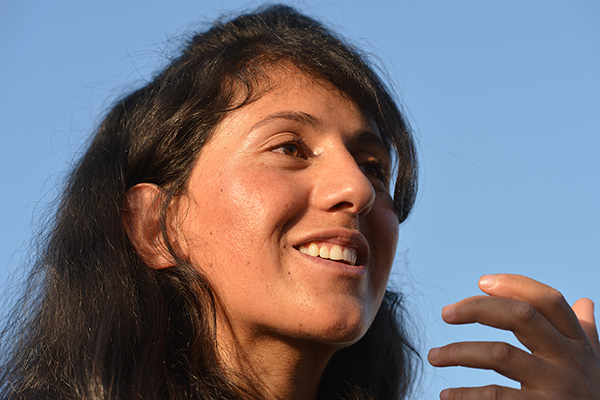 Samina Baig urges families to realize that women can help toward building a more powerful country.

The first Pakistani woman to climb Mount Everest says she wants her achievement to inspire all the women in her country to believe they can achieve their dreams.

Last month, Baig became the first woman from Pakistan to reach the 8,848-meter summit of the world’s tallest mountain, after a grueling expedition in rough weather. As she unfurled the green and white Pakistani flag on the peak, tears of joy and pride rolled down her cheeks, she said in an interview from her Islamabad home.

The 22-year-old said that as she stood with the world at her feet, her mind turned to the millions of women back home who were denied opportunities because of their gender in Pakistan’s conservative society. “I was thinking about the women of Pakistan, those who are not allowed to get education, those who are not allowed to do whatever they want to do in their life,” she said. “I hope that the families will understand that the contribution of women is important and can be more powerful for building a greater country.”

Human rights groups say Pakistani women suffer severe discrimination, domestic violence and so-called “honor” killings—when a victim is murdered for allegedly bringing dishonor upon her family. They say women have borne the brunt of rising Islamist extremism in Pakistan, where the Taliban threaten parts of the northwest.

In October the Taliban tried to murder schoolgirl Malala Yousafzai in the northwestern area of Swat for the “crime” of campaigning for the right of young women to get an education.

Baig, from the small town of Shimshal in Pakistan’s Hunza valley said she hoped to empower the women of Pakistan through her achievements. “Mountain climbing is my passion and to empower women through my expeditions is the reason. I am doing the mountain climbing to empower women,” she said. “The reason behind this expedition was to convey a message that if Samina can climb a mountain, other girls can do anything they want in their life.”

The Everest climb was not Baig’s first significant achievement—after taking up climbing just three years ago she became the first person to reach the summit of the 6,400-meter Chashkin Sar peak in northern Pakistan in 2010. “Chashkin Sar was virgin and we climbed it for the first time and afterwards the people renamed it as ‘Samina Baig,’” she said.

Training for the Everest expedition, which she accomplished with Mirza Ali, her brother, and with financial help from New Zealand, began 12 months ago in the frozen wastes of her home district. “It took us one year. My brother and I were planning for the last one year. We went for training in winter on glaciers. We went to Shimshal Pass in the winter to prepare, [for] stamina building and technical training,” she said.

Northern Pakistan is home to some of the world’s most impressive mountains and glaciers and challenging climbs, and Baig urged the government to relax the rigid visa regime that she said was holding it back as a destination for mountaineers. “The problem is the visa issue. People want to come to Pakistan but are not given visas. We wish for visas to be given to those people who want to come to Pakistan,” she said.

With Everest in the bag, Baig’s next target is to summit the highest peaks in each of the world’s seven continents—all while studying for a degree in tourism management.