‘I am Really Patriotic’ 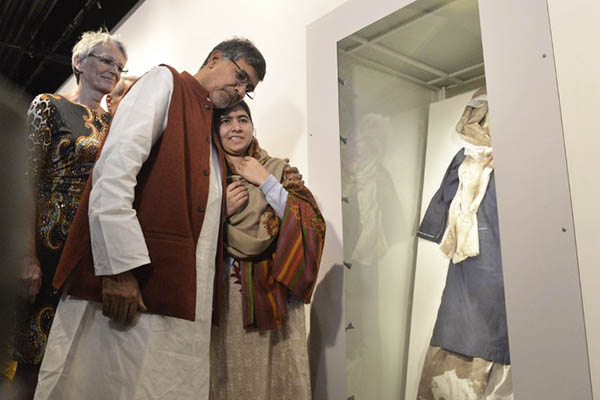 Malala Yousafzai bursts into tears after seeing her bloodstained school uniform at exhibition in Oslo.

Nobel Peace Prize laureate Malala Yousafzai said Thursday that she could see herself becoming prime minister of Pakistan in about 20 years.

“I want to help my country, I want my country to go forward and I’m really patriotic,” said the 17-year-old, the youngest Nobel laureate ever. “That’s why I decided that I’d join politics and maybe one day people will vote for me and I get the majority, I’ll become the prime minister,” she said.

Asked about her political aspirations during a press conference with Norway’s female premier Erna Solberg in Oslo, Malala added that “you can become prime minister when you’re 35, not before that, so [it’s] like in many years’ [time].”

The teenager became a global icon after she was shot in the head and nearly killed by the Taliban on Oct. 9, 2012 for insisting that girls had a right to education.

Yousafzai said she was inspired by former Pakistan prime minister Benazir Bhutto who was assassinated in 2007. “She is an example … giving this message that women can go forward because in some communities women are not supposed to go forward and become a prime minister,” said Yousafzai, who now lives in Britain.

Separately, while touring an exhibition dedicated to her work and her fellow 2014 Nobel Peace Prize winner, India’s Kailash Satyarthi, Yousafzai burst into tears at the sight of the bloodied school uniform she was wearing the day the Taliban shot her.

The uniform is on display in the exhibition, which the activists jointly inaugurated in Oslo. While touring the exhibition Malala came across the clothes she was wearing when the Taliban shot her in the head in Swat valley.

The normally composed teen, who nearly died of her injuries but went on to make a stunning recovery after surgery in England, broke down at the sight of her bloodstained scarf, jacket and trousers, which were displayed in a glass case.

Satyarthi, 60, attempted to comfort the girl he said he considered like a “daughter” with a hug and a kiss on the head. “You are so brave, you are so brave,” he was quoted by the Norwegian news agency NTB as saying.

This is the first time Yousafzai’s uniform is being shown in public.

Malala: An inspiration for a generation. Can I just say that the emergency procedure which saved Malala’s life was performed in Pakistan. She was transferred to the UK primarily for rehabilitation and reconstruction.