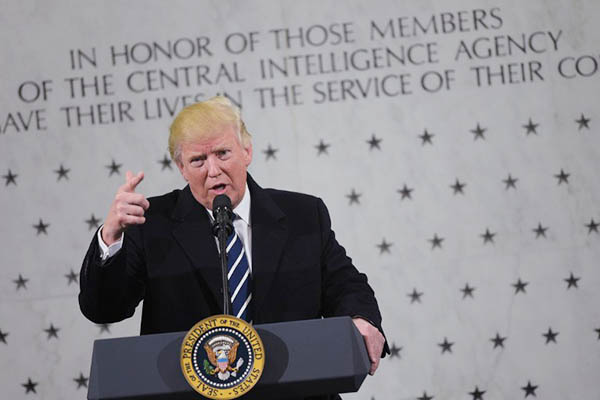 President Donald Trump told the CIA on Saturday it had his full support as he paid a visit to mend fences after publicly rejecting its assessment that Russia tried to help him win the U.S. election.

“I am with you 1,000 percent,” Trump said in a short address to CIA staff after his visit to the agency headquarters in Virginia.

In his first full day in office, Trump moved swiftly to confront simmering tensions left by U.S. intelligence findings that Russia interfered in the U.S. election to try to tip the outcome in Trump’s favor.

“I love you, I respect you,” he told members of the U.S. intelligence community. “We’re all on the same wavelength, right?” he asked, referring in particular to the fight against the Islamic State group. “We have not used the real abilities that we have. We’ve been restrained. We have to get rid of ISIS.”

Mike Pompeo, Trump’s pick to lead the CIA, has not yet been confirmed by the U.S. Senate. A 53-year-old Republican lawmaker, Pompeo is considered a foreign policy hawk and was an ardent opponent of former president Barack Obama’s administration.

Outgoing CIA director John Brennan had stern words for Trump last Sunday, saying he needed to be more “disciplined” in his public comments. “I don’t think he has a full appreciation of Russian capabilities, Russia’s intentions and actions,” Brennan said of Trump on Fox News Sunday.

Trump, likening U.S. intelligence to Nazis, suggested Brennan himself might have leaked an unsubstantiated report that the Russians had gathered damaging salacious personal information about him.

The intelligence agencies had given both Trump and Obama a summary of the dossier, which later was published in full by BuzzFeed.

Brennan said the U.S. intelligence chiefs considered it their responsibility to make Trump aware that it was in circulation.