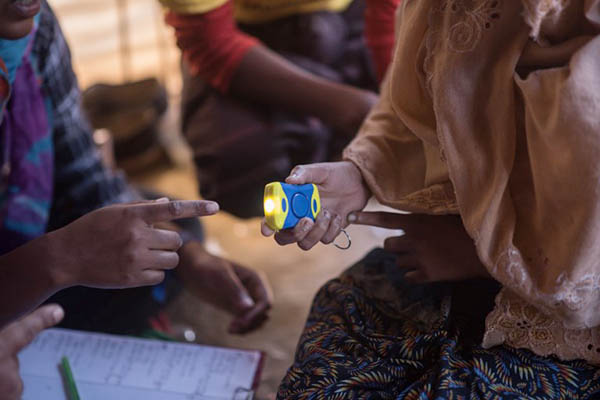 A piercing wail emanates from the small device in the palm of a young Rohingya woman, drawing startled looks from other refugees crowded onto a hillside in a Bangladesh camp.

It has the desired effect—the safety alarms are designed to attract attention and scare off anyone preying on vulnerable women and girls, who make up the majority of refugees in the sprawling Rohingya tent cities.

The colorful plastic sirens are being distributed to Rohingya women, girls and the infirm in Cox’s Bazar district, where an estimated 655,000 of the Muslim minority have arrived since August. They have escaped a systematic campaign of rape and violence in Myanmar described by the United Nations as ethnic cleansing—but the squalid camps across the border are not without dangers.

Aid groups say women and girls, many of whom have arrived in Bangladesh alone, are at particular risk of exploitation by pimps and human traffickers active in the camps.

There have already been cases of minors lured away by promises of marriage or jobs in big cities that have ended in brothel work or forced labor, the International Organization for Migration says.

In the teeming camps there is little privacy and overcrowding forces women to share latrines with men or venture into the jungle at night. The alarms, fitted with a torch and high-pitched siren, provide comfort for Rohingya women like 22-year-old Hazera Khatun, who frets constantly about the safety of her two daughters.

The trio arrived in Bangladesh in September without Khatun’s husband, who she said was gunned down by Myanmar soldiers as they fled their village. “I feel safer and less scared now after receiving this, because now I know that if I encounter any problem, I can call for help,” Khatun told AFP, gesturing to the device in her hand.

The local charity behind the alarms, Moonlight Development Society, developed the idea after hearing about abduction attempts on young children in the camps. Since then, they have distributed nearly 1,000 alarms to refugees—mainly women and children, but also the elderly and others vulnerable to abuse.

“If someone is bedridden, or cannot call out for help, they can just press the alarm,” the nonprofit’s medical assistant Marufa Munni told AFP.

Apart from showing refugees how to use the alarms, staff train aid workers and other Rohingya on how to respond should one sound in the camps. The charity hopes to expand the program beyond its trial site to the district’s mega-camps of Kutupalong and Balukhali—the world’s largest refugee settlement, housing around 550,000 people—by January.