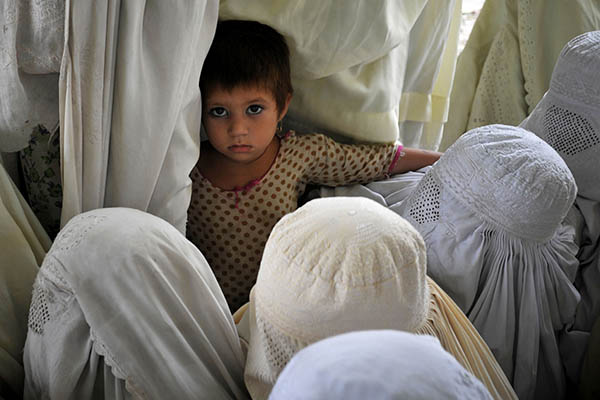 Women IDPs in Bannu open up about their suffering.

Clad in a head-to-toe burqa, there is little to distinguish Amina Zari from the dozens of women queued up to collect aid at a food distribution point at the sole internally displaced persons (IDPs) camp in Bannu. Since fleeing her home in North Waziristan, Zari says she has few options. “At home, we can walk around freely without worrying [about purdah],” she says. “Here, I feel suffocated.”

According to the FATA Disaster Management Authority, 469,357 people have registered as IDPs in Bannu since Operation Zarb-e-Azb started on June 15. Of these, 147,919 are women and 198,418 are children. Intended to prevent Pakistan becoming a “sanctuary of terrorists,” according to Prime Minister Nawaz Sharif, the military operation has already claimed over 300 militants and dozens of hideouts. But for the largely conservative residents of North Waziristan—a majority of the women Newsweek spoke with had never left their houses prior to the military operation—securing the state has forced them to leave their sanctuaries behind.

“For a woman of Waziristan, it’s either your father’s house or your husband’s house,” said 45-year-old Najma, who traveled from Miranshah to Bannu on foot after failing to secure transport. The journey, which takes around two hours via car under normal circumstances, stretched to over two days for those traveling by foot or on animal-drawn carts. “It was such a dreadful experience to travel for so long in such scorching heat with our livestock and children,” she added. She wasn’t the only one.

Ajmal Dawar and his pregnant wife were forced to flee their home in North Waziristan due to fear of airstrikes. According to Dawar, the experience left him humiliated and dejected. “This was the most shameful and embarrassing journey of my life,” he told Newsweek, saying his wife went into labor shortly after they reached Bannu. “Usually, women from the neighborhood act as midwives and help each other [through the birthing process]. But due to the military operation, my wife and I had only each other for support,” he said. Dawar’s son was born in Bannu, but his wife remains hospitalized due to the long journey and has been advised special care and nutrition. “I can’t afford to give her what she needs,” he added.

Medical treatment remains a chief concern for the internally displaced in Khyber-Pakhtunkhwa province. IDPs told Newsweek they were neglected at hospitals and had no access to ambulances while traveling, making it harder to transport sickly relatives. In their defense, representatives of the four major hospitals near Bannu—District Headquarters Hospital, Khalifa Gul Nawaz Hospital, Combined Military Hospital, and the Women and Children Hospital—told Newsweek they were already overcrowded with women and children and had no more room. They said a majority of the IDPs were in shock and required special care. “These women have witnessed horrible destruction and are in a state of shock,” said a doctor at the Women and Children Hospital. “Majority [of our patients] have diarrhea, pregnancy complications and psychological issues,” she added.

Yasmin Akhtar, the regional manager of non-governmental organization Khwendo Kor (Sisters Home), said the women she had spoken to were facing a wide array of issues. The long journey, change in diet, and cramped living conditions have caused sickness among many women and children, she said. “Many of these women are poor. When they were rushed out of their homes, they forgot their medication and their husbands just don’t have the money to buy them replacements,” she said. “[Due to rising rents] as many as 16 women and children are living in tiny rooms,” she added, saying many were suffering from malnutrition and seasonal diseases. “At home, these women hardly ever leave their houses and when they do, they use long shawls to visit neighbors,” said Akhtar. “A lot of women are asking us for burqas.”

In addition, she said, schoolgirls were worried about whether they would be able to continue their education. “At the moment there are summer vacations but they are uncertain what conditions their homes and schools will be by the time the holidays are over,” she added.

At the aid distribution point, 55-year-old Omer Jana said she wasn’t feeling well but had to queue up or her family wouldn’t have anything to eat. “Whatever we had, we left in Mir Ali,” she said of her home. “I don’t know whether the military will be able to defeat the militants,” she said, “All I know is that this displacement had made us beggars.”

🙁 these pashtoons gad aelf respect which is being compromised. ALLAH in per reham ferma

They have my sympathies. May be when they go back, they will think twice before cooperating with foreign militants.