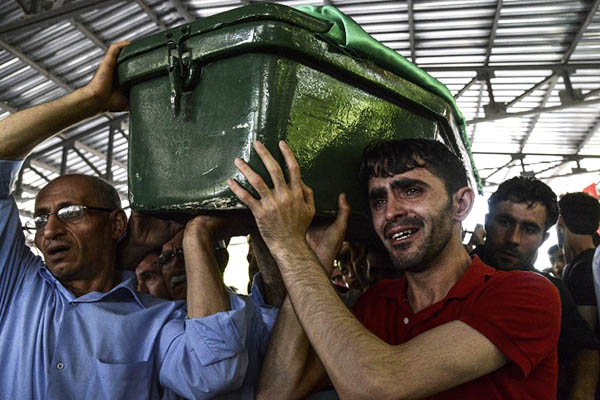 At least 51 people killed, 94 others wounded in attack at Gaziantep near border with Syria.

A suicide bomber as young as 12 killed at least 51 people at a wedding in Turkey, President Recep Tayyip Erdogan said on Sunday, pointing the finger at the Islamic State group.

Erdogan said Saturday’s blast in Gaziantep near the Syria border “was the result of a suicide bomber aged between 12 and 14 who either detonated [the bomb] or others detonated it.” The explosion was the latest attack to rock the key NATO member in a horrific year that has seen strikes blamed on Kurdish and Islamist militants as well as a bloody July 15 botched coup.

The president said the Islamic State group was the “likely perpetrator” of the bomb attack, the deadliest in 2016, which targeted a celebration attended by many Kurds.

The remains of a suicide vest were found at the scene, the chief prosecutor’s office said according to broadcaster CNN-Turk.

Gulser Ates, one of scores wounded in the attack, told Hurriyet the attack took place as the party was breaking up in the mainly Kurdish neighborhood. “We were sitting on chairs, having a chat with one of our neighbors. During the explosion, the neighbor died on top of me. I remember being underneath. If my neighbor hadn’t fallen on top of me, I would have died,” she said. “The bride and groom’s happiest day was poisoned.”

The bride and groom—Besna and Nurettin Akdogan—were rushed to hospital but were not seriously wounded.

According to the state-run Anadolu news agency, the bride was released from hospital, saying as she left: “They turned our wedding into a bloodbath.” She later returned to hospital after repeatedly fainting, Anadolu reported.

Funerals for many of the victims took place on Sunday with an AFP photographer saying some covered relatives’ coffins with the Kurdistan flag.

As hundreds waited to say their final goodbye, some voiced anger at what they perceived to be the government’s failure to prevent the attack. Shouts of “shame on you, Erdogan” rang out while others hurled water bottles at police who kept their distance from rowdy crowds for fear of violence.

One distraught mother wailed: “I lost my children, now I will never see them again.”

Erdogan told reporters the death toll was now 51 with 94 hurt in the attack.

A total of 69 people remained in hospital, with 17 in critical condition.

Health Minister Recep Akdag said a large number of those injured were women and children.

The bride and groom were reportedly from the mainly Kurdish region of Siirt further to the east and had themselves been uprooted due to the flare-up in violence with Kurdish militants. The pro-Kurdish Peoples’ Democratic Party (HDP) said its members had been present at the wedding, also attended by many women and children.

Erdogan said such attacks aimed to sow division between Turkey’s different groups including Arabs, Kurds and Turkmen and to “spread incitement along ethnic and religious lines.”

Many jihadists see Kurds as one of their main enemies, with Kurdish militias playing a significant role in the fight against I.S. on the ground in Syria.

A defiant Erdogan said there was “no difference” between the group of U.S.-based preacher Fethullah Gulen—whom he blames for the failed coup bid—the outlawed Kurdistan Workers’ Party (PKK) “and Daesh, the likely perpetrator of the attack in Gaziantep.”

“Our country and our nation have again only one message to those who attack us—you will not succeed!” he said.

Prime Minister Binali Yildirim said Gaziantep would show the same spirit it had shown in 1921, when it defeated French forces in Turkey’s Independence War which led to the word Gazi (war hero) being added to its original name of Antep.

The pope urged the faithful to pray for the victims while U.N. chief Ban Ki-moon called for the perpetrators to be “quickly identified and brought to justice.”

A major city just 60 kilometers north of the Syrian border, Gaziantep has become a hub for Syrians fleeing the civil war in their country. But as well as refugees and opposition activists, there have long been fears it was home to a significant jihadist presence.

I.S. suicide bombers have carried out several attacks in Istanbul this year, while Kurdish militants have hit targets in both Ankara and Istanbul.

On Thursday, 12 people were killed in three bombings blamed on the PKK, who Erdogan said had killed 70 members of the security forces in the last month alone.

The blast in Gaziantep came just hours after Yildirim said Ankara would play a “more active” role in efforts to solve the Syrian civil war.