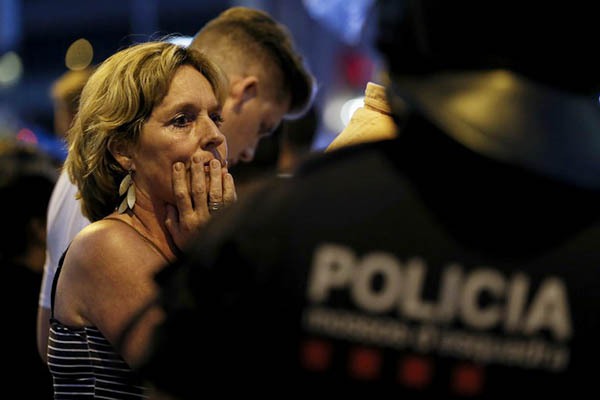 The Islamic State group on Saturday claimed responsibility for deadly attacks in Spain and stabbings in Russia, in statements carried by the jihadists’ propaganda agency.

“Attacks by the soldiers of the caliphate in Spain… led to the deaths and wounding of more than 120 people from the states of the Crusader alliance,” Amaq said in a statement on its Telegram account. I.S. said its fighters “ran over several Crusaders with a truck in the coastal town of Cambrils.”

Eight hours after a deadly van attack on Thursday afternoon that left 13 people dead in Barcelona, an Audi A3 car rammed into pedestrians in Cambrils, 120 kilometers south of Barcelona.

Police killed the five attackers, some of whom were wearing fake explosive belts.

Six civilians and a police officer were wounded in the second attack and one woman later died of her wounds, Spanish authorities said.

Amaq later also claimed an attack by a knifeman in Russia’s far north who wounded seven people on Saturday before being shot dead. “The executor of the stabbing operation in the city of Surgut in Russia is a soldier of the Islamic State,” Amaq said.

I.S., which once controlled a self-declared “caliphate” across large parts of Iraq and Syria, has suffered major military losses in both Arab states this year. It has called for attacks against Western and other states taking part in the U.S.-led coalition fighting against it, as well as on Russia which has sided with the Damascus regime in battling the jihadists.