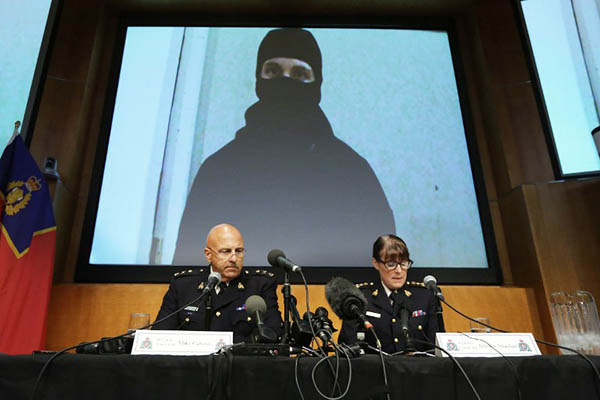 Police say Aaron Driver set off explosives in a taxi, mildly injuring the driver, before he was shot.

A Canadian man who had pledged allegiance to the Islamic State group in a video was shot dead in a taxi after setting off an explosive device, police acting to thwart an imminent attack said on Thursday.

Aaron Driver, 24, was killed on Wednesday after Canadian authorities received a tip from the U.S. Federal Bureau of Investigation (FBI), who had intercepted the video, the Royal Canadian Mounted Police (RCMP) told a press conference. “This disturbing event serves to remind us that Canada is not immune to the threat of terrorism,” Public Safety Minister Ralph Goodale said. “Unwavering vigilance is always required,” he said.

RCMP Deputy Commissioner Mike Cabana said they received information from the FBI early Wednesday, including “a martyr video that had been prepared by an individual who at that time was unknown to us but who was clearly in the final stages of preparing an attack using homemade bombs.” Based on the information received, police believed an attack was possible “within the following 72 hours” in an “urban center,” Cabana said.

Police and counterterrorism experts identified the man in the video, wearing black clothes and a balaclava, as Driver within three hours. Meanwhile, an alert about a “credible terrorist threat” was issued nationwide.

Notably, security was beefed up along Toronto’s network of subways, bus lines and street cars used by 1.8 million people a day. But officials said they never determined Driver’s intended target.

At about 4:30 p.m. local time on Wednesday, the RCMP intercepted Driver in Strathroy, Ontario, outside the home where he lived with his sister. He had just gotten into the back seat of a taxi.

When police approached, Driver detonated an explosive device in the back seat of the cab, causing minor injuries to the driver, before he was shot dead by officers, authorities said. “If he had gotten out of that residence before we got there the scenario would have ended differently, I’m confident of that,” RCMP commander Jennifer Strachan said.

There could have been “significantly greater loss of life,” had Driver set off a blast in an airport terminal, mall or transit hub, she said.

Police said they do not believe Driver had any accomplices, but revealed that he had been in “fairly constant contact” with several jihadists around the world. They included two members of the Islamic State group, a British youth arrested for his involvement in a terror plot targeting Australia, and Elton Simpsonone of two Americans who launched an attack on a Texas exhibition of caricatures of Islam’s Prophet last year.

Goodale said he spoke by telephone with his U.S. and British counterparts, Attorney General Loretta Lynch and Home Secretary Amber Rudd, respectively, about the foiled terror plot. He also announced that Ottawa would create a counter-radicalization office, and later this month start public consultations on proposed security reforms.

“Yesterday’s events underscore the need for Canada to become a world leader in counter-radicalization,” he said.

Driver first come to the attention of authorities in late 2014 after police received complaints of extremist posts on social media. In interviews with Canadian media, he appeared to support two separate lone wolf attacks by suspected jihadists in October 2014 in rural Quebec and Ottawa. Two soldiers died in those attacks. He also expressed a desire to travel abroad to join the Islamic State group.

Police also discovered that he received a Twitter message from Simpson.

He was arrested in June 2015 but released a month later. He was ordered to undergo counseling from a religious leader, wear an electronic monitoring bracelet and stay off the Internet, but was not under surveillance, police said. Those restrictions were gradually loosened and were scheduled to expire this month.

In the video released by the RCMP, Driver said he would retaliate for Canada’s participation in the U.S.-led coalition war against the Islamic State group. “You have a heavy debt which has to be paid and you have Muslim blood on your hands, and for this we will have your blood,” he said.