Home Latest News ‘I Wanted to Warn Them’

‘I Wanted to Warn Them’ 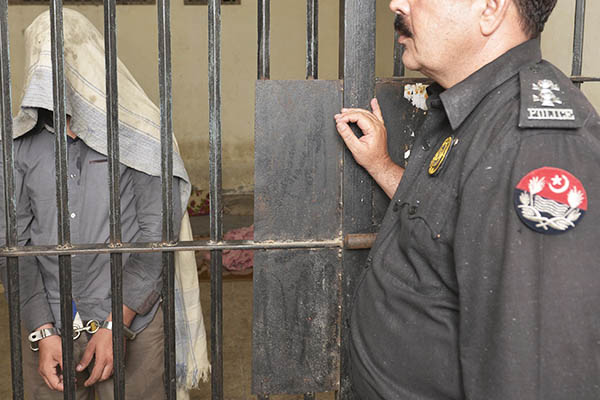 After murdering three men, paramedic in Lahore claims he was trying to save them from the ‘evil’ of homosexuality.

Short in stature and softly spoken, paramedic Muhammed Ejaz was probably destined for a life of relative anonymity—until he began killing gay men he met online.

The 28-year-old father of two was arrested last week and confessed to three brutal murders, saying he wanted to send out a message about the “evils” of homosexuality, though police allege he had sex with his victims first.

The killings have sent shockwaves through the underground gay community of Lahore, which fears Ejaz could be lionized as a hero in a conservative Islamic society where homosexuality is stigmatized and sodomy is punishable by up to 10 years in jail.

In an interview from his prison cell Sunday, Ejaz, who sported a neat trimmed beard and was kept shackled, expressed remorse over the killings but said he was acting to stop wrongdoing. “My way was wrong. It is tragic that the families have lost their relatives but they were spreading evil in society and I had to stop it,” said Ejaz, who is due to appear in court on Monday. “I wanted to warn them to stay away from this evil.”

The killings happened in March and April, according to police officer Asad Sarfraz, who headed the investigation. The victims were a middle-aged retired Army major and two other men, both in their twenties. All three had been sedated and were found with their necks broken.

After examining their cellphone call logs, police were able to identify Ejaz’s number and found another former lover whom they used as a honey trap to lure him to a meeting a week ago, where they arrested him.

Ejaz, who was married in 2011 and has two infant children, said his family knew nothing of what he had done and insisted that he was not gay himself. “I started going on Manjam two months ago using my mobile phone, and found that the gays are everywhere in Lahore,” he said, referring to a popular social networking website. “They are spreading evil and transmitting diseases. They cannot control themselves,” he added.

Ejaz said he was the victim of sexual abuse by an older boy when he was around 10 years old and had led a deeply unhappy childhood. “I have hated them ever since what happened to me,” he said.

The case has shone an unwelcome spotlight on Pakistan’s closeted gay community, who are often afraid to come out to their families and in the absence of gay venues rely on the Internet and mobile apps to arrange clandestine dates.

With the case due to be heard in court on Monday, one member of Pakistan’s gay community said he was worried Ejaz could be hailed as a hero by some conservative Muslims. “The problem is that pedophilia and homosexuality are often conflated, so people think eradicating homosexuality means eradicating child abuse,” he said.

Ejaz had been a sexually active member of the gay community for several months, the man claimed. “It seems he was motivated by self-hatred and internalized homophobia,” he said. “The worry is—will it inspire others to do the same?”