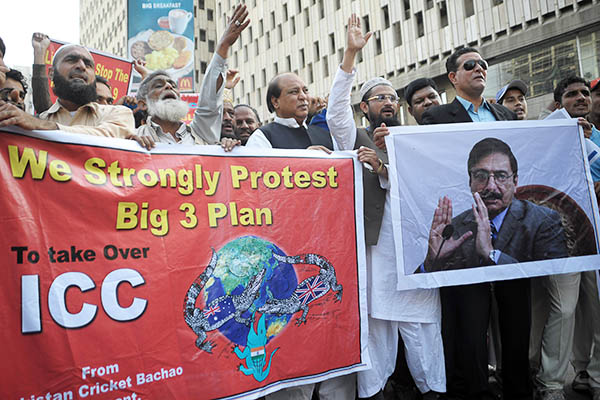 Sri Lanka and Pakistan abstain from voting for new governance and structure that effectively cedes control to India, England and Australia.

Cricket’s world body on Saturday passed a wide-ranging and controversial shake-up of its governance and structure despite strident protests that it gives too much power to the ‘Big Three’ of India, England and Australia.

The dominant trio seemed to be the big winners after the proposals were approved by a necessary eight out of 10 full members at a hastily convened International Cricket Council (ICC) board meeting in Singapore. Sri Lanka, Pakistan and South Africa had all opposed the revamp when it was debated last month, but South Africa’s Chris Nenzani voted in favor at Saturday’s meeting. Sri Lanka and Pakistan abstained.

“I think South Africa cheated us,” Ashraf said afterwards. “Just last night (Friday) they told us that they have changed their stance and told us that it was the decision of their board (CSA). It disappointed us.”

In the revamped ICC, India—which contributes 80 percent of global revenues—and fellow powerhouses England and Australia will have permanent seats on a new, five-member executive committee. The committee will make recommendations to the decision-making body, the ICC board, which will be chaired by India’s N. Srinivasan from the middle of this year.

Revenues will be distributed according to countries’ contributions—financial, sporting and historical—but the seven non-‘Big Three’ members will be boosted by a new Test Cricket Fund.

The Future Tours Program, designed to guarantee series for all Test teams, will be changed with a series of binding, bilateral agreements to be struck between members. And the World Test Championship, which was due to debut in 2017, has been scrapped, with the one-day Champions Trophy continuing in 2017 and 2021. The Test championship was deemed unworkable, a statement said.

The representatives of South Africa, Pakistan and Sri Lanka did not give details about their positions as they left the meeting, although Sri Lanka’s Nishantha Ranatunga said he would hold discussions with his board.

“Pakistan and Sri Lanka believed that they needed more time to discuss the amendments to the resolutions with their respective boards,” said ICC President Alan Isaac. “There is a hope that when we come back at the next meeting that they will able to also support the resolutions.”

“There was general agreement and (it was) all very satisfactory,” he said.

The approval came as some surprise given the loud opposition that erupted in the cricketing community to the original proposals made by the three influential countries. Ahead of the meeting, a leaked document detailed South Africa’s reaction to the original proposal, which it called “extremely disappointing and indeed hurtful when originating from three great cricketing nations.”

Pakistan cricketing legend Imran Khan said the plan smacked of colonialism, while Lord Harry Woolf, author of a report that urged greater distribution of power at the ICC, called it “alarming” and “entirely motivated by money.”

“I don’t see how if we had this to consider we could see it as anything but a retrograde step,” Woolf told Britain’s Daily Telegraph. “It is giving extraordinary powers to a small triumvirate of three people, and everybody else has got no power to say anything or do anything.”

Anti-corruption group Transparency International expressed “serious concern” and Sri Lanka had also said the proposals violated the ICC constitution. Despite the concerns, Isaac said it was important that cricket’s most influential countries now had a greater stake in the ICC, rather than be at risk of drifting away.

“It’s been very important I think for ICC to have more commitment from those three members,” he said. “They would say to you I think that in the past they’ve tended to concentrate on matters in their own country and perhaps not always spent the time helping, leading the ICC. So their original proposal was really part of a commitment to get more involved in the leadership of the ICC.”

Several of the proposals still need to be adopted by the ICC’s Full Council, and various committees would draft them before they are submitted for approval.