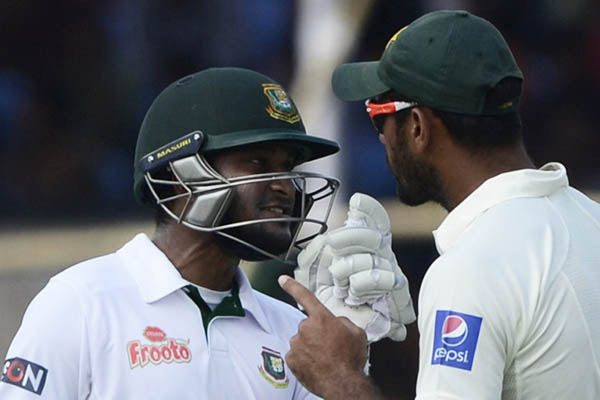 Both players have been docked 30 percent of their wages for arguing on pitch during final day of first Test match.

Bangladeshi all-rounder Shakib Al Hasan and Pakistani paceman Wahab Riaz were fined Sunday for a heated on pitch argument during the final day of the drawn first Test between the sides.

Hasan and Riaz had 30 percent of their match wages docked for breaching the International Cricket Council’s code of conduct during the Test in Khulna, the ICC said in a press release on its website. The ICC didn’t say how much that percentage represented but it is thought to be around $1,000 each.

“Posturing and finger pointing in each other’s face is not what we expect from two senior international players and has no place in cricket,” the ICC quoted match-referee Jeff Crowe as saying. “International cricketers should always remember that they are being watched and followed by millions and, therefore, need to always control their emotions and demonstrate respect,” he added.

The incident happened in the 118th over of Bangladesh’s second innings on Saturday when the two players “unnecessarily halted play by arguing and pointing fingers at each other,” the release said.

It added that both players had admitted their guilt and that no formal hearing was needed.

Shakib notched an unbeaten 76 runs during his team’s second innings of 555-6, helping Bangladesh earn their first draw against Pakistan after losing all previous eight Tests to their rivals. The second and final Test of the series will be held at Dhaka’s Sher-e-Bangla National Stadium from May 6-10.