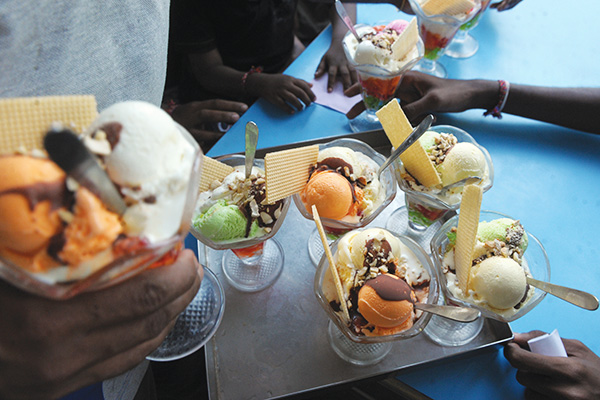 [dropcap]A[/dropcap]ny self-respecting child has dreamed of having ice cream for dinner. Not just as a distant finish, but right up front at the starting line. Regrettably, by the time we’re old enough to make the dream come true, sense and scruples have taken over. We dutifully eat our entrée and our salad, and hold the shivery delights until the very end.

Why not realize the dream? I’m not talking about sweet iced treats; I’m talking about savory ice creams and sorbets. Forget chocolate and fruit: everything from cheese to fresh peas can be made into a sublime frozen concoction.

Savory ice cream is my favorite “wow” trick for dinner parties, because it looks so fancy but takes minimal effort. Salmon tartare is delicious, but salmon tartare served atop a scoop of avocado-wasabi ice cream suggests that Thomas Keller or Heston Blumenthal might have dropped by your house to help whip up something special. Yet avocado wasabi ice cream is one of the simplest things you’ll ever make: you puree avocado, cream, wasabi, lime, and a bit of sugar in your blender, then toss the result into your ice cream freezer. (You do need an ice cream machine, but these days very serviceable models are available for as little as $55 on Amazon.) And its creamy spiciness is the perfect accompaniment to the tart, fresh flavors of the salmon mixture.

I know it’s a little hard to swallow at first. So I gathered a group of skeptics: there was my husband, who views vegetables with suspicion and doesn’t even like strawberry ice cream; my mother, my aunt and her boyfriend (none of whom have ever forgiven me for the time I took them to an Ethiopian restaurant), and a 6-year-old girl. This crew wasn’t about to be convinced with arguments like the fact that Delmonico’s, New York’s most famous restaurant in the 19th century, served ice-cream flavors such as asparagus and pumpernickel rye. They had to be won over.

On the tasting menu were spicy bacon ice cream in a bourbon-maple base; carrot ginger sorbet; and feta ice cream served over fresh watermelon. (It took me an hour to prepare all three, including cleanup.) My aunt seemed game, but the rest approached their samples more warily. That didn’t last. “This is actually really good,” my husband admitted about five minutes into the carrot sorbet. Even the 6-year-old agreed.

The biggest hit was the bacon ice cream. I’d meant to serve it with slices of cantaloupe—a twist on the prosciutto and melon appetizers you often see this time of year—but the melon I’d bought turned out to be bad. Even on its own, however, the spice of the maple, the smokiness of the bacon, and the tart hint of bourbon were fantastic.

Savory ice cream is even better paired with the summer’s fresh produce. There are two factors that make for a successful pairing: flavor and texture. For flavors, you take your cue from ones that are already often used together. Obviously, the inspiration for the salmon-avocado-wasabi combination was sushi; we paired the feta with watermelon and beets. If you’re looking to splash out with something more surprising, think in contrasts: cut sweetness with sour or spicy, a strong flavor with something creamy or sour. The thing everyone liked best was the Aleppo pepper I’d sprinkled over the bacon while cooking, which gave a surprise finish to the smoky and sweet flavors of the ice cream.

Once you know what flavors you want to use, you shouldn’t have much trouble putting together your concoction. Most ice-cream bases are a fairly similar mixture of milk, cream, egg yolks, and sugar; all you need to do to make savory ice cream is find a basic recipe, then scale back the sugar, and replace the traditional flavorings with ingredients of choice. Most sorbets are even simpler: basically juice and sugar. There are a few things you do need to remember—if you use booze, make sure you cook off the alcohol, which will keep your ice cream from freezing properly. You should also keep in mind that the frozen product will not taste as strong as it does in the saucepan, so don’t be shy about flavor—though do keep in mind that the point of it is to provide a hint of the flavor you want to impart, while still letting the freshness of your other ingredients shine through. With those simple rules in hand, if you can think it up, you can probably make it.

You’ll also want to pay careful attention to textures. Think about how we eat ice cream now: with something crunchy like a cone; with something liquid, like a soda or a sauce; or on something dense and cakelike, such as a brownie or an ice-cream sandwich. On the other hand, it’s not very good on things that are squishy, like a crêpe, or tough, like zwieback.

So when it’s ice-cream-for-dinner time, a crisp fresh fruit, like apple or melon, is an excellent accompaniment, as are raw vegetables like cucumber slices. So are savory items like a cheese crisp or a pappadam. You could also put a small scoop in the middle of a cold cucumber or watermelon soup. And remember: only use a small scoop—you don’t want to fill people up so that they don’t have room for, well, dinner.