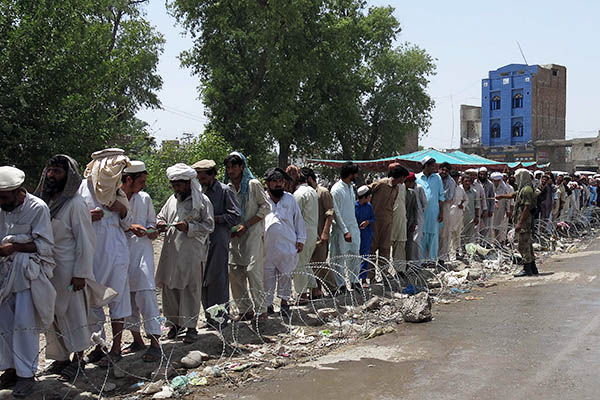 At least two protesters were shot dead and 10 others wounded on Sunday evening after security forces personnel opened fire on a group of internally displaced persons at the Baka Khel Camp in Bannu, according to locals.

“The problem occurred in the evening when dozens of IDPs returned to the camp. Soldiers tasked with security at the entrance asked them for their gate pass, which led to an argument between the civilians and the security forces,” said Zohaib Wazeer, one of the displaced at the camp. “Other IDPs within the camp rushed to the aid of the displaced and started protesting against the security forces,” he added.

According to Wazeer, the security forces initially fired tear-gas on the protesters to disperse them, but then started aerial firing. “At least two people were killed in the firing and 10 others were injured,” he added. Four soldiers were also wounded in the clashes.

An official of the security forces, speaking on condition of anonymity as he is not authorized to speak to media, confirmed one person had been killed in the shooting. “It was self-defense. If the soldiers had not reacted promptly, the situation could have spiraled out of control, especially as there are over 30,000 people living in the IDP camp,” he added.

Ghairatullah, a 39-year-old cattle herder displaced by the military operation who lives in the camp, blamed the Army for allowing the situation to escalate. “A soldier began beating one of the guys. It created anger among the locals. And they tried to restrain him. Then the rest of the soldiers joined in with the beating and it spread panic,” he said. “We were helpless, we had nothing. We picked up stones and threw them at the soldiers to stop them beating our friends but they began firing and started killing us,” he added.

“There are still over a million IDPs living in miserable conditions away from their homes, with no signs of reconstruction or rehabilitation of their destroyed homes and livelihoods,” she told AFP. She added that the Taliban’s main leaders remained at large, and called for a parliamentary review of the offensive with greater media access to the war zone.

The Pakistan Army launched operation Zarb-e-Azb against Taliban and other militant strongholds in North Waziristan in June last year. The conflict displaced over a million residents of the region, most of who have yet to return to the area as the militant threat persists. The government has also complicated the matter by requiring returning civilians to sign a contract requiring them to combat future militant threats and accept unilateral military action.