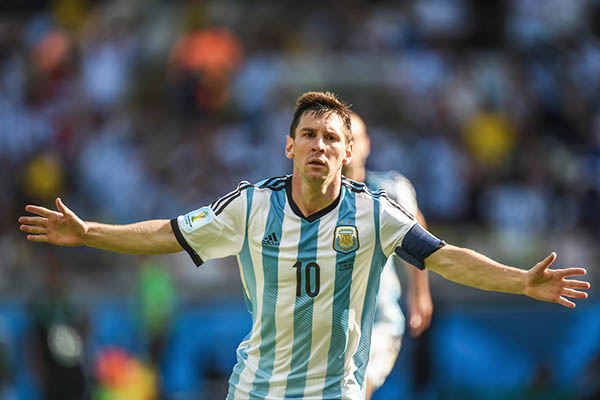 When he starts to speak, Lionel Messi gives the impression that he has forgotten his larger-than-life image back in the locker room. Football’s biggest star is an easygoing guy, and says the secret to staying grounded is simple: “Being myself, in the same way, forever.” Off the pitch, the Argentina and Barcelona forward is a guy who prefers blondes, loves fried chicken with fries, and despite having over seven million fans on Facebook, still feels most comfortable in his small circle of family and friends. Messi sat down for a chat with Newsweek Argentina’s Pablo Caralps at FC Barcelona’s Camp Nou in 2011. Excerpts:

What do you think was the best play of all time?

Diego [Maradona]’s goal [against England in 1986 ]. He was in the moment, and it signified so many things beyond that goal. That was the best play.

Maradona recounts that while he was dribbling past England defenders, he remembered how he had missed a goal in a similar situation years ago. Do missed chances from the past haunt you sometimes when you’re on the ball?

I remember what Diego said at the time. It’s true that you think of similar situations [where] you might’ve missed, but usually I don’t. Everything happens so fast.

How do you feel when people say you’re better than Maradona?

It’s an honor to be compared with him, but he is unique. I think it is a wrong comparison. I don’t agree.

Recently in New York, you said that you liked being able to walk around town like a normal person. Do you fantasize about being lost in the crowd often, or cheering from the stands instead of being the star on the pitch?

I’d rather be on the field than in the stands cheering. But off the field, yes, there are days when I would love to go unnoticed and be able to do whatever I want without having people look at me.

What are your fears?

I’m fearless. But I worry about things that could happen to my family or the people around me, such as what happened with my grandmother, which was very painful for me. I’m really not afraid of anything else.

Do you feel your star status affects your relationship with others? Have you ever had the feeling of losing or winning friends because of it?

No, the people in my life have been there for me since I was a kid. I grew up with them. Later, having a lot of people around does make you wonder why they’re there, but my circle of people is always the same.

I’m more interested in collective titles—winning the League again, the Cup, Champions [League], to achieve the Copa America with Argentina, which is up next and is a nice opportunity to start changing things. That’s what I’m interested in.

If you hadn’t been a footballer, what would you have been?

I don’t know. I always dreamed and thought I was going to be a footballer. I never liked anything else.

Of all the personal and professional obstacles you’ve faced, what was the hardest to overcome?

At first, everything was difficult. It was not easy to come in as a child and change everything—to start from scratch. That’s complicated, but it also helped me grow as a person and build character, and helped me to be here today.

Can you imagine yourself as a parent? What kind of father would you be?

What has had the biggest impact on you during your travels as a UNICEF ambassador?

Everything in Haiti, because I had heard about it, read about it, saw what was happening on television. But actually going there, getting an up-close view, is very different. My visit there shocked me and I was really impacted by what they were going through.