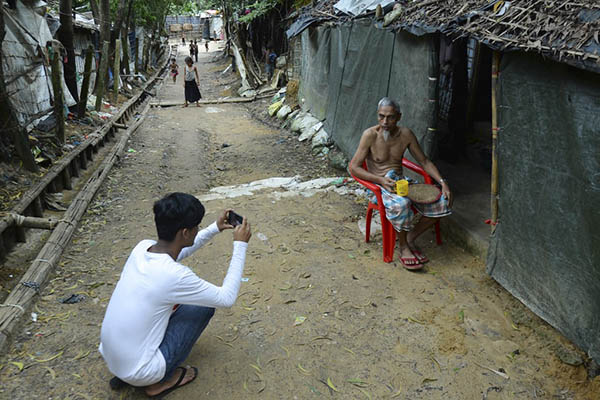 When Mohammad Rafiq spotted two Rohingya refugee girls dusting their faces with circles of traditional thanaka powder under the warm morning light, he quickly took out his smartphone to capture the moment.

The 19-year-old budding photographer, who fled to Bangladesh in August 2017 after a military crackdown in Myanmar, uses his mobile phone to record the daily lives of nearly one million stateless Rohingya in a vast camp in southern Bangladesh. “I loved the photo instantly as it reflects our culture and the innocence of the little girls who barely want to remember the crisis we are facing,” Rafiq told AFP.

Rafiq is among some 30 Rohingya youths selected by the World Food Program for its “Storytellers” project. For two weeks, they are taught smartphone photo and video-shooting techniques—such as understanding light, exposure and angles—as well as writing skills. The refugees then share their stories directly with the public through Facebook, Twitter and Instagram, with audiences around the world posting comments and asking questions.

“The idea behind it is to be able to hand back the narrative to the people that we are already assisting,” WFP spokeswoman Gemma Snowdon told AFP.

The Storytellers Page on Facebook has more than 30,000 followers and includes similar schemes rolled out in Chad and Uganda. All the Rohingya posters have a similar goal—to share with the outside world the raw, emotional ups and downs they face living in the world’s largest refugee camp.

Minara, who was four months’ pregnant when she fled Myanmar, shares videos of how refugees are given ropes to tie their makeshift tarpaulin roofs to bamboo poles so they are not blown away by strong winds. Another post, by Hafsa Aktar, is a heartrending letter to her father who was left behind, in which she writes of the difficult conditions in the camp and her deep longing to return to her homeland.

Being able to take photos again has put a spring in the steps of Rafiq, who wanted to continue his schooling after the 10th grade in Myanmar but was blocked by authorities. When he was 15, Rafiq’s father bought him his first-ever smartphone as a present. Thrilled with the device, he explored his town in Myanmar’s northern Rakhine state, taking photos of everything he loved.

But Rafiq’s life was turned upside down in 2017 when the brutal army campaign drove some 740,000 Rohingya Muslims across the border to Cox’s Bazar, where another 200,000 refugees were already living in squalid camps.

During the arduous journey to neighboring Bangladesh to escape the violence, the teenager lost his favorite possession—his smartphone. “I arrived in Bangladesh with my mother and three younger siblings after 10 days of harrowing walks through the hills,” Rafiq recalled as he sat in a shanty inside the camp. “I wish I could have captured the moments of anguish we had to suffer on our way out of Myanmar.”

Now Rafiq is becoming a star on Facebook through his photos. In one post that has attracted some 180,000 views, Rafiq captures a woman meditating during the month of Ramzan to show how the Muslim minority are now free to practice their religion even as they grapple with the hardships in the crammed shelters.

“International media is covering the stories in the camps but they are not here 24/7 but I am,” he said, adding that his stories were more authentic. “People learn from my stories that we are seeking justice and want to return home.”

On some days, Rafiq walks to a vantage point in the camps where he can see the hills of Myanmar shrouded by clouds in the distance, and thinks of home. “I see flashbacks of how my friends and I used to roam around the place. I feel very sad,” he said, adding that he hopes to return one day and be a photojournalist. “That will be the fulfillment of my dream.”