‘I’m Praying for You’ 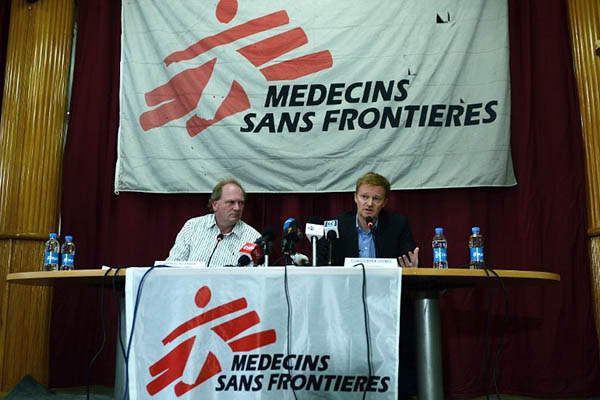 Medical charity Doctors Without Borders (MSF) on Thursday released chilling details from a devastating U.S. bombing of an Afghan hospital, saying staff and patients had been decapitated and lost their limbs with some gunned down from the air.

The raid on Oct. 3 in the northern city in Kunduz killed at least 30 people, sparking an avalanche of global condemnation and forcing the French-founded charity to close the trauma center. An AC-130 gunship repeatedly bombed the hospital for around an hour even as MSF staff sent out harrowing messages to officials in Kabul and Washington, informing them of heavy casualties, the charity said in an internal review of the strike.

The review described patients burning in their beds, medical staff decapitated by shrapnel and a nurse who suffered a “traumatic amputation” in the attack.

People were shot at, apparently from the plane, as they tried to flee the burning building, with some eyewitnesses cited in the report saying the shooting appeared to follow those on the run. “The view from inside the hospital is that this attack was conducted with a purpose to kill and destroy,” MSF general director Christopher Stokes said in Kabul. “But we don’t know why. We don’t have the view from the cockpit, nor what happened within the U.S. and Afghan military chains of command.”

MSF said the raid, which occurred after the Taliban’s brief but bloody capture of Kunduz, persistently targeted the main building housing the intensive care unit and emergency rooms despite desperate pleas to officials. “At 2:56 a.m. an SMS was sent from MSF in Kabul to Resolute Support [NATO] insisting that the airstrikes stop and informing that we suspected heavy casualties,” read the report. “At 2:59 a.m. an SMS reply was received by MSF in Kabul from NATO saying ‘I’ll do my best, praying for you all.’”

Three separate investigations—led by the U.S., NATO and Afghan officials—are looking into the strike, but MSF has labeled the incident a war crime and demanded an independent probe by an international fact-finding commission.

The Pentagon had read the MSF review and was “committed to conducting investigations that are thorough and transparent,” Captain Jeff Davis, director of press operations, said in a statement. “Since this tragic incident, we have worked closely with MSF to determine the facts surrounding it,” he said. “We continue to work closely with MSF in identifying the victims, both those killed and wounded, so that we can conclude our investigations and proceed with follow-on actions to include condolence payments.”

President Barack Obama has admitted the strike was a mistake, but the Pentagon has offered shifting explanations for what exactly went wrong. Afghan officials have repeatedly said that Taliban fighters had sought shelter in the hospital, in a tacit justification for the bombing that drew widespread condemnation.

The charity’s review acknowledged that approximately 20 Taliban fighters were being treated in the hospital at the time of the bombing but insisted that “MSF’s no-weapons policy” inside the compound was enforced. “Some public reports are circulating that the attack on our hospital could be justified because we were treating Taliban,” Stokes said. “Wounded combatants are patients under international law, and must be free from attack and treated without discrimination. Medical staff should never be punished or attacked for providing treatment to wounded combatants,” he added.

The airstrike forced the closure of the trauma center in Kunduz, which had been a lifeline in the war-battered region. At least 10 patients and 13 staff are among the 30 dead, MSF said, warning that the toll could rise still further.

The MSF report released Thursday can be found here.