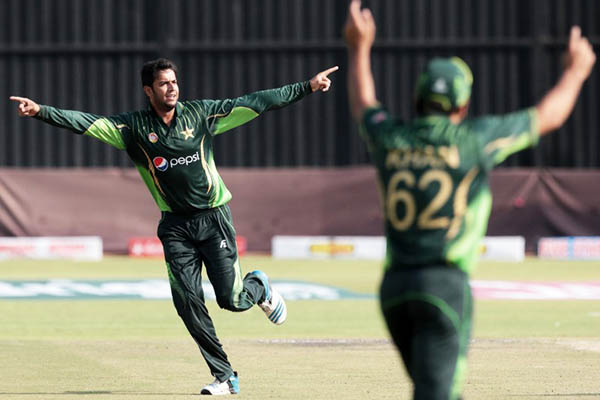 Imad Wasim took four wickets to spin Pakistan to a 13-run victory over Zimbabwe in the first of two Twenty20 internationals at Harare Sports Club on Sunday.

Although Zimbabwe put in a disciplined performance with the ball after losing the toss and restricted Pakistan to 136 for eight, they were unable to contend with Wasim’s bowling on a slow pitch and crumbled to 123 for nine in reply. The 26-year-old Wasim finished with figures of 4 for 11 from four overs, and was named man of the match having also contributed 19 runs from just 12 balls.

“Everything I touched turned into gold today,” Wasim said. “I tried to bowl wicket-to-wicket and the basics paid off.”

Such a comfortable victory was not always on the cards for Pakistan, who slumped to 29 for three early in their innings as seamer Chamu Chibhabha grabbed three wickets in six deliveries. Their recovery was led by Shoaib Malik, who scored 35 from just 24 balls before he was bowled by a skiddy Sean Williams delivery, and was finished off by Mohammad Rizwan’s unbeaten 33.

Chibhabha finished with figures of 3 for 18 from three overs, and also took an outstanding catch in the outfield to dismiss Pakistan captain Shahid Afridi late in the innings. That helped Zimbabwe prevent the onslaught at the death that their bowlers have been vulnerable to this year, but they lost in-form Chibhabha to Wasim in the first over of their reply.

Hamilton Masakadza’s steady 25 kept the hosts in the game as they headed towards the halfway stage of their chase, before Wasim returned to take a wicket in each of his remaining three overs and leave Zimbabwe’s lower order with too much to do.

Captain Elton Chigumbura’s 31 took the match into the last over with Zimbabwe needing 16 to win with two wickets in hand, but debutant Imran Khan held his nerve to secure the win for Pakistan. “We just lost too many wickets at the end,” Chigumbura reflected. “The wicket was a bit slow and difficult, but requiring six runs an over, it was good enough to bat on. We have come close on many occasions but we keep on losing.”

The second T20 international takes place at the same venue on Tuesday, and will be followed by three one-day internationals.