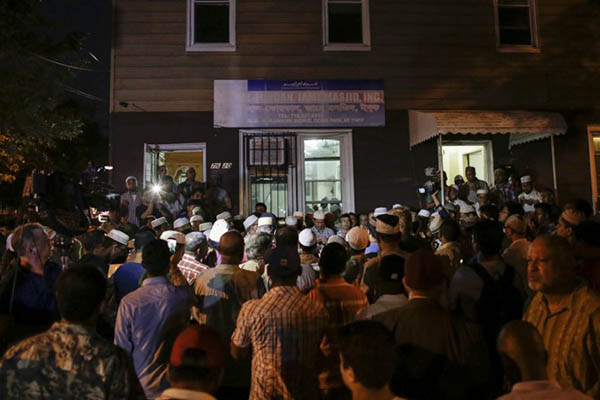 A gunman shot and killed a New York imam and his assistant near their mosque in the borough of Queens during a brazen attack carried out in broad daylight on Saturday.

Police said the imam, identified as Maulama Akonjee, 55, and his assistant, 64-year-old Thara Uddin, were shot just before 2:00 p.m. in the Ozone Park neighborhood. The working class area, on the border between Queens and Brooklyn, is home to many Muslim families from Bangladesh.

Both men were taken to nearby Jamaica Hospital with gunshot wounds and were pronounced dead there.

The shooting comes amid a climate of growing Islamophobia and anti-Muslim sentiment as a series of deadly attacks have unfolded in the United States and abroad, some of which have been claimed by the Islamic State group, and Republican presidential contender Donald Trump’s proposal to ban Muslims from entering the U.S.

The two men were approached from behind by a suspect, who witnesses saw fleeing the scene with a gun, according to police. The street on which they were killed is called Liberty Avenue. Officers said the individual is still at large and the investigation is ongoing.

U.S. media reported that the men were shot after leaving the Al-Furqan Jame Masjid mosque after Saturday afternoon prayers, dressed in traditional Muslim garb. However, police said the motive is unknown and no arrests have been made.

“There is nothing in the preliminary investigation to indicate that they were targeted because of their faith,” police told journalists.

But Sarah Sayeed of the New York mayor’s office insisted that “the NYPD is looking at all angles of this crime, including the hate crime [angle].”

Kobir Chowdhury, who heads the nearby Masjid Al-Aman mosque in Brooklyn, said: “Please, read my lips. This is a hate crime, no matter which way you look at it. It’s hate against humanity, it’s hate against Muslims, these are Islamophobes who are causing these kind of troubles.”

During a vigil, the faithful prayed outside the mosque, heads bent and their palms facing the sky. “Imagine your father gunned down for no reason, and then let that feeling, let that motivate you to come out of your silence,” Afaf Nasher, the director of the New York chapter of the Council on American-Islamic relations, said at a tense press conference in front of the mosque. “When we stay silent we allow crimes to continue to occur,” she said. “So every single one of us shares in this responsibility. And let’s not forget the victims who are essential to all of this.”

U.S. Representative Nydia Velazquez said in a tweet that she was “horrified” by the shooting. “All NYers must stand united in condemning acts like these,” she added.

The neighborhood’s city council representative Eric Ulrich tweeted that he stood “in strong solidarity with all Muslim New Yorkers tonight as we mourn the killings.”

“When a religious leader is killed in broad daylight on the streets of Queens, we must come together as a community and demand justice!” he wrote. As night fell, a few hundred people gathered near the scene of the fatal shooting, many of them yelling “we want justice.”