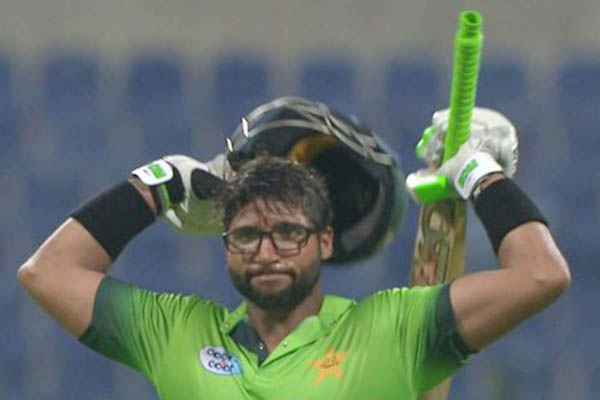 Pakistan cricket’s newest discovery Imamul Haq has some very large footsteps to follow in—those of his uncle, the great Inzamamul Haq. But Imam wasted no time in getting started, smashing a match-winning century on his one-day international debut against Sri Lanka in Abu Dhabi on Wednesday, becoming only the second Pakistani and 13th batsman in the world to achieve the feat.

As a child, Imam would receive guidance from Inzamam on the field, his father helping him skip school against his mother’s wishes. He went on to wear Pakistani colors at junior level, impressing in the 2014 Junior World Cup.

Imam’s run of form continued at domestic level and two centuries in the Under-23 Emerging Cup in Bangladesh this year elevated him to Pakistan’s one-day side. “I am proud to score a hundred on debut,” said Imam, now 22. “When I was told that I achieved the honor of scoring a debut hundred I felt more proud to do this feat for my country.”

Saleem Elahi is the only other Pakistani to hit a debut century, also against Sri Lanka at Gujranwala in 1995.

It’s not only Imam’s style of play that is similar to his uncle. His stocky build and cherubic face resembles that of a young Inzamam, who once famously hit an Indian spectator after being called “Aloo” (potato). The obvious difference is that Imam wears glasses—a rare sight in cricket these days—and bats left-handed. But the similarity to Inzamam is significant.

“Inzi uncle has been a great influence. Whenever I need help in batting he gives me time and always tells me to be positive, play brave cricket and believe in destiny,” said Imam. But having a cricket great for an uncle has its challenges, particularly as Inzamam heads the selection committee, which chose the current one-day squad.

Imam’s selection was criticized but the youngster justified his place. “It’s not my fault that I am his nephew,” Imam said. “I can’t help that. The best for me is to answer my critics with my bat and I have done that. It makes no difference to me because I have grown up in a [cricketing] family. I have self-belief and I am mature and I have played in Junior World Cups and have performed well to win in domestic matches.”

Imam’s century in the third one-day international looked in doubt when he was given out caught behind on 89. He was trudging back when his batting partner Mohammad Hafeez stopped him to check the legality of the catch.

Television umpire Richard Kettleborough declared that the ball had touched the ground before reaching the wicketkeeper’s gloves, allowing a relieved Imam to return to the crease and complete his century. “Obviously it was bad feeling,” Imam said. “I knew that I had nicked it, so I thought it’s out and I have lost a chance to score a hundred. But when I knew that it was not out I felt like I was given a new life.”

Imam has a long way to go, but his first knock at the international level proved that he has plenty of potential to make a name for himself, just like his famous uncle.