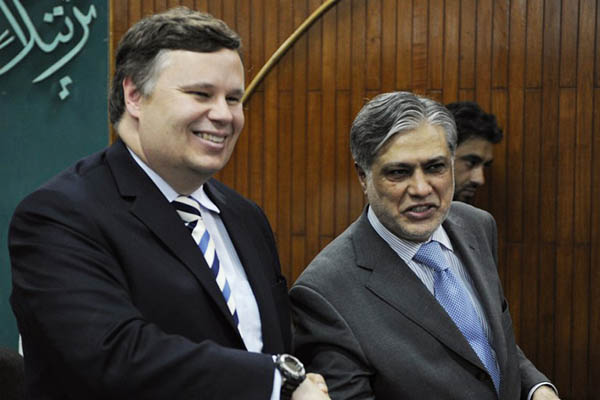 Mission chief says Fund’s executive board will consider in March whether Pakistan has qualified to receive third tranche of loan.

Pakistan was on track to receive a third loan tranche worth $550 million from the International Monetary Fund this year, the Washington-based lender indicated on Sunday, saying the nation’s economic recovery was gathering pace.

“The IMF … is encouraged by the overall progress made in pushing ahead with policies to strengthen macroeconomic stability and reviving economic growth,” IMF’s Jeffrey Franks said after talks with Finance Minister Ishaq Dar in Dubai. The IMF said Pakistan’s economy was picking up, with growth expected to reach about 3.1 percent in 2013/14 compared to its earlier estimate of 2.8 percent.

Cash-strapped Pakistan, plagued by a homegrown Taliban insurgency, is battling to get its shaky economy back on track and solve a chronic energy crisis that cripples industry. The IMF made an initial payment of $540 million, and in November fund officials said during a monitoring visit that Pakistan was “broadly on track” with reforms. In December, Pakistan received $554 million as a second tranche of the loan.

Franks said IMF’s executive board would, tentatively, consider whether Pakistan was qualified to receive the third tranche in late March.