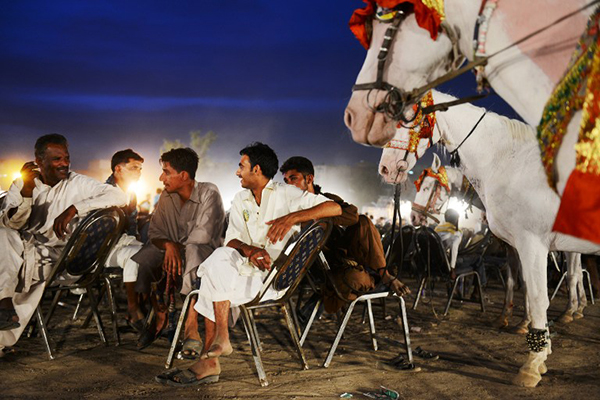 Which horse are you backing in this race? Roberto Schmidt—AFP

What you need to know to make sure your vote counts.

You Need Your ‘Block Code’!

The Election Commission of Pakistan requires that you text your National Identity Card number to 8300 to obtain your “block code” and serial number on the voter roll. This cellphone service is currently not working. If you do not have your block code, ask your neighbors, who should have the same block code as you.

Several polling stations, at least two in Lahore, have not received the complete voter lists. Polling time may be extended beyond the original deadline of 5 p.m. at these stations.

Take Your ID with You

You will not be allowed to vote if you do not present your original National Identity Card at the polling station.

You are not allowed to take your cellphone inside the polling booth. Firearms are banned from polling premises, as are lighters and matchsticks.

Do not take children with you to the polling station.

You will be required to show your original National Identity Card to the polling staff.

The polling agents, who are representatives of political parties, will ask you for your block code and inform you of your serial number on the voter roll.

After this, the presiding-officer, who is a representative of the Election Commission of Pakistan, will require you to record your thumb impression on his or her polling register and to get a finger of your choice stained with permanent ink.

You will then be handed two ballot papers signed and stamped on the back: green for the National Assembly, and white for the provincial assembly. You will also be provided a voter stamp. Use this to select the candidates of your choice behind the designated screen.

After you’ve stamped the ballots, fold each one very carefully, blotting it with tissue paper if you’re carrying any. If the ink stains more than one box on either of your ballot papers, your vote will likely be invalidated.

This is a secret ballot. You are under no compulsion to tell anyone who you have voted for.

Good job . its a very good time post this article .