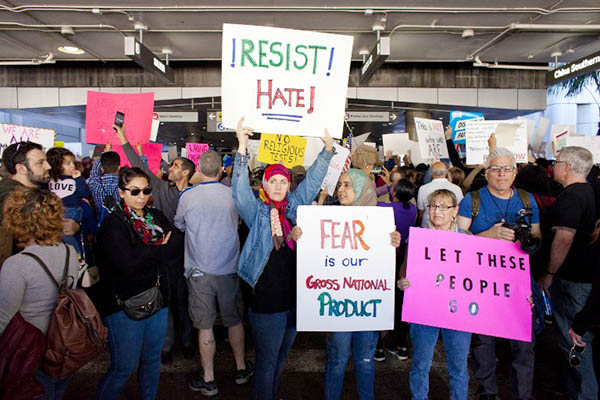 Since Donald Trump’s election New York has hosted a string of protests against the new president’s agenda—but few anticipated the rally that developed almost at lightning speed at JFK airport over the weekend.

Alerted by social media and news reports, they held up homemade signs and chanted “Let them in!” late into the night.

Hanna Cowart sat out the Jan. 21 “Women’s March” that, a day after Trump’s inauguration, saw millions take to the streets nationwide. But now, the 21-year-old said, “it’s becoming difficult for people to be silent.”

Even a federal ruling ordering authorities not to deport refugees and other travelers detained at airports could not soften the mood, with some demonstrators hurling verbal barbs at police who pushed protestors back to the sidewalks.

Private car driver Mousa Alreyashi traverses JFK every day, but on Saturday afternoon he decided to stop driving early and demonstrate for the first time. “It’s sending a message,” said the American citizen of Yemeni origin, who has been in the U.S. for 20 years.

Alreyashi’s mother, sister and brother remain in Yemen—one of the countries on Trump’s list—with visa applications that have been pending for seven years. He said “they were shocked” following the temporary ban: “it’s like ordering food and in the middle of the delivery, people tell you now cannot deliver.”

Trump’s order follows through on one of his most controversial campaign promises to subject travelers from Muslim-majority countries to “extreme vetting”—which he declared would make America safe from “radical Islamic terrorists.”

“No hate, no fear, refugees are welcome here,” shouted demonstrators at JFK, some of them hoisting signs that read “We are better than this” and “Immigrants make America great.”

Despite having lived through the Vietnam War and protests against former presidents Ronald Reagan and George W. Bush, Christopher Gunderson called the current political landscape “the most serious situation in my lifetime.”

“People are beginning to feel their power,” he said. “It’s possible that we’re entering a very dark period, but the resistance so far has been heartening.”

Sister protests broke out at other airports nationwide including Washington, Chicago, Minneapolis, Denver, Los Angeles, San Francisco and Dallas. “It’s not surprising that people are mobilizing,” said David Gaddis. “It’s not 1939. We have institutions,” the 43-year-old said. “People are prepared to stand against this.”

“Every day he’s in office, it’s a national emergency.”

In her Florida hometown, Cowart said many cast votes for Trump and did not understand the protests. “They think we should accept it because he’s the president,” she said. “It’s not going to happen.”