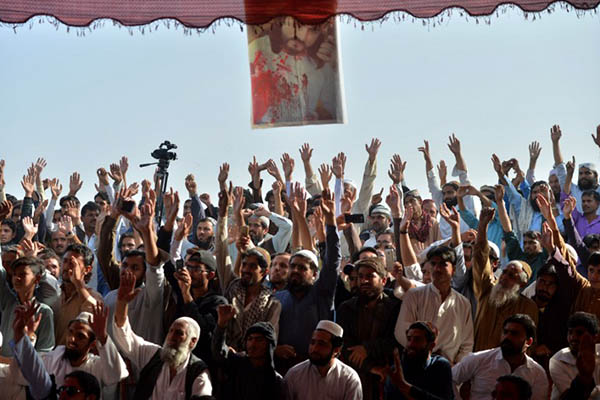 The killing of a young social media star in Karachi has unleashed festering anger at a rash of alleged extrajudicial murders and the police accused of orchestrating them. Hundreds of people die each year at the hands of law enforcement officers under pressure to crack down on kidnapping, murder and gang crime in a city routinely ranked among the most dangerous in the world.

But the fatal shooting of 23-year-old Naqeebullah Mehsud, an aspiring model whose goofy dance videos and airbrushed brown locks had earned him a large Facebook following, brought thousands of people onto the streets to urge an end to impunity. “We demand that his killer be hanged publicly,” said Mohammad Khan Mehsud of a national outcry over his son’s death. “We saw people from all the four provinces [of Pakistan]—men and women, kids, youngsters and sisters—show solidarity with Naqeebullah.”

Mehsud was shot dead along with three other people in what police say was an operation targeting Taliban insurgents on Jan. 3. Friends and relatives insist the internet celebrity had no connection to militancy. They say he was the victim of a so-called “encounter killing”—an “encounter” being police shorthand for when a suspect resists arrest.

Such deaths have surged in Karachi since 2013 when paramilitary forces and police launched a massive “clean up” operation targeting Taliban militants, organized crime networks and armed political muscle. In its wake, the Human Rights Commission of Pakistan (HRCP) said there were at least 598 extrajudicial killings in 2014 and an additional 343 the following year.

A preliminary investigation headed by Sanaullah Abbasi, chief of Karachi’s Counter Terrorism Department, said the encounter involving Mehsud was probably staged. “We have interviewed some militants [purportedly linked with the case] in jail and inspected the scene of crime that seemed to be very doubtful,” Abbasi told AFP. “Prima facie, it was a fake encounter.”

Much of the anger following the social media star’s death has focused on Rao Anwar, senior superintendent of the Karachi police force. Anwar, who rose through the force’s battle-hardened ranks in the 1990s, has been accused of spearheading hundreds of killings including that of Mehsud.

Last week a Karachi lawyer filed a petition in the Sindh High Court, listing 250 allegedly fake encounters involving Anwar since 1992. The police officer has also been added to a travel ban after trying to flee the country. He has missed successive court summonses and is now believed to be on the run, according to a senior police official familiar with the case.

Yet as anger grows against him, experts warn that the campaign is not the work of a few bad cops, but rather the result of institutional shortcomings in the sprawling and violent megacity. Long before Anwar, bullet-riddled bodies were being dumped in barren neighborhoods as police with little faith in the courts took on dangerous armed political factions and often heavily-armed insurgents.

“The investigation procedures are archaic,” said Asad Iqbal Butt, director of HRCP. “So they [police] are left with only one option… pick a guy, hang him, beat him and if he survives that is his fate and if he dies, just dump him in the bushes.”

The rise in encounter killings accompanying the clean-up offensive has coincided with a drop in violent crime—with instances of kidnapping, murder and terrorism all dramatically down. “It is good that crimes and violence have come down in the city as police and [paramilitary] Rangers have been killing the terrorists and criminals. But common and innocent people must be not the victims,” said Umeed Ali, an auto rickshaw driver in Karachi.

Rehmat Khan, a retired senior police officer, said that in developed countries, “encounter” killings were rare. “Here it takes place because we are incompetent professionally, we look for short cuts.”