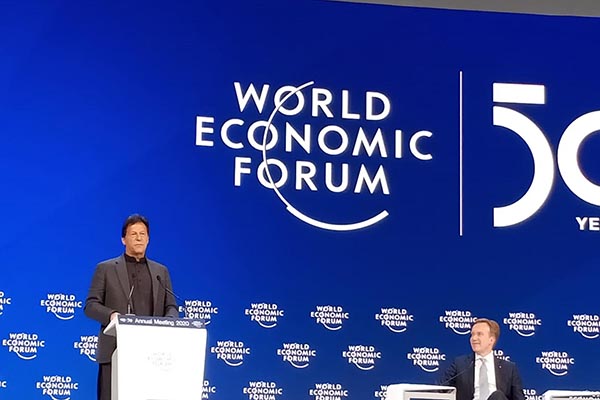 Admitting that Pakistanis are “hurting” due to the policies enacted under the Pakistan Tehreek-e-Insaf-led government’s economic stabilization program, Prime Minister Imran Khan on Wednesday claimed efforts were underway to provide more job opportunities and growth in the coming year.

Delivering a keynote address at the Special Session of the World Economic Forum in Davos, Switzerland, Khan said his government had inherited the “worst economic crisis” in Pakistan’s history. He said he had never faced the kind of “public attitude” that had resulted from the economic decisions of his government. “People are hurting. We have gone through this very tough period,” he said, adding that the economy had now stabilized with the currency improving and the World Bank appreciating the government’s attempts to improve the ease of doing business in the country.

“This year we are looking towards economic growth,” he said, adding that while the country was now headed in the right direction, a “lot of hard work” still remained.

According to Khan, the incumbent government plans to increase employment opportunities for youth in the coming year, and encourage foreign investment. He said one of Pakistan’s greatest advantages was that over 60 percent of its 210 million population was below the age of 30. It was unfortunate that this youth bulge was ignored by previous administrations, said Khan, adding his government has started a skills development program to encourage youth to start their own businesses. This would greatly uplift Pakistan as a whole, he added.

Another advantage of Pakistan’s is its “untapped” mineral wealth, said Khan, claiming the government was now seeking to take advantage of that. He claimed that Pakistan’s mineral resources, if fully extracted, could repay its entire foreign debt. Apart from minerals, said Khan, Pakistan is also blessed with fertile land whose full potential has yet to be explored.

Referring to Pakistan’s “strategic” location, the prime minister said there was great trade potential with its neighboring countries. Immense opportunities for growth would emerge as soon as “Pakistan and India’s relationship becomes normal and trade starts between the two countries,” he said, adding peace in Afghanistan would also open the route to energy resources of Central Asian states. He said no country’s economy could improve without peace and stability.

“From now onwards, Pakistan will only partner with another country in peace. We will not become part of any other conflict,” he said of his government’s decision to avoid all external conflicts. He said this policy had been reflected by Islamabad’s efforts to ease tensions between Iran and Saudi Arabia, as well as Iran and the United States. In addition, he said, “It is the nearest we are to some sort of a peaceful solution in Afghanistan.”

He reiterated that Pakistan had suffered greatly from its role in the U.S. war against the Soviet Union in the 1980s, and then again after 9/11. He said both these conflicts had produced militant groups that had cost thousands of lives. He responded to a question from WEF President Borge Brende by saying there was no more terrorism in Pakistan, and 2019 had been the safest year in the country since 2001. “If any terrorism comes into Pakistan now, it emerges from Afghanistan,” he claimed, adding that this is why peace in the neighboring nation was so important to Islamabad.

This peace was already paying dividends in terms of tourism, claimed Khan, saying it had doubled between 2018 and 2019. “To exploit the true potential of the tourism sector, the country needs investment,” he said, noting the country boasted religious sites for Sikhs and Buddhists, in addition to the Gandhara civilization and mountain tourism.

In the coming year, Khan concluded, his government’s biggest challenge was to improve state institutions so the country could be better governed.

During a subsequent Q&A, Khan said any conflict between Iran and the U.S. and its allies would be a “disaster” for Pakistan and the developing world. He said he had also conveyed these concerns to U.S. President Trump—though the American leader had not given any response.

Responding to another question, the prime minister said there was no military solution to the Afghan crisis, reiterating his belief that it could only be resolved through dialogue.

Khan also discussed the ‘Billion Tree Tsunami’ project, claiming that his government had helped people recognize how vulnerable Pakistan was to the threat of climate change. He said that the government aimed to plant 10 billion trees in the next four years to not only help combat global warming but also reduce pollution in major cities across the country.