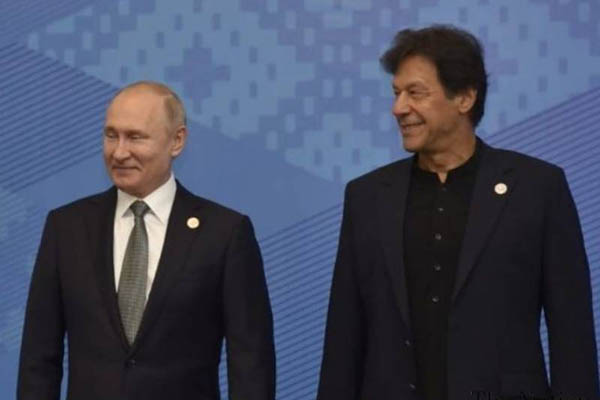 Prime Minister Imran Khan on Monday appreciated Russian President Vladimir Putin for declaring that freedom of expression did not allow individuals to disrespect religious beliefs, noting that he had been highlighting the perils of Islamophobia at several international forums.

“Just spoke to President Putin primarily to express my appreciation for his emphatic statement that freedom of speech could not be a pretext to abuse our Prophet (peace be upon him),” the prime minister wrote on Twitter after their phone call. “He is the first Western leader to show empathy and sensitivity to Muslim sentiment for their beloved Prophet (PBUH),” he added.

In December, during an annual question-and-answer session, Putin had said that he did not believe disrespecting Islam’s Prophet fell under the purview of artistic freedom. “This is a violation of the freedom of worship, which offends the rights of the people who practice Islam, which leads to other, even more radical and extremist manifestations,” he had added.

A statement issued by the Kremlin noted Khan’s appreciation of Putin’s statement, adding that the Pakistani leader had noted the broad support in Pakistani society, and the Muslim world in general, for the Russian president’s comments. It said that Putin had informed Khan that the Russian Federation had historically been a multi-ethnic and multi-religious state, where people practicing different religions, including Islam, traditionally co-existed and interacted.

According to Khan, the two leaders’ phone call discussed ways to move forward on trade and other mutually beneficial sectors. “The prime minister underscored that Pakistan’s bilateral relationship with Russia was on an upward trajectory, with an increased focus on trade and economic ties and energy cooperation. He reiterated the government’s resolve for early realization of the Pakistan Stream Gas Pipeline Project,” read a statement issued by the Prime Minister’s Office.

The Pakistan Stream Gas Pipeline Project is an 1,110km-long initiative connecting Karachi with Lahore at a cost of nearly $2.5 billion. It is intended to transport 12.4 billion cubic meters of natural gas annually and has been pending since 2015.

In addition to Russian-Pakistani ties on trade, economy, energy, and humanitarian efforts, said the Kremlin, Putin and Khan had also discussed how to combat the spread of the coronavirus pandemic. P.M. Khan also reiterated his invitation for President Putin to visit Pakistan.