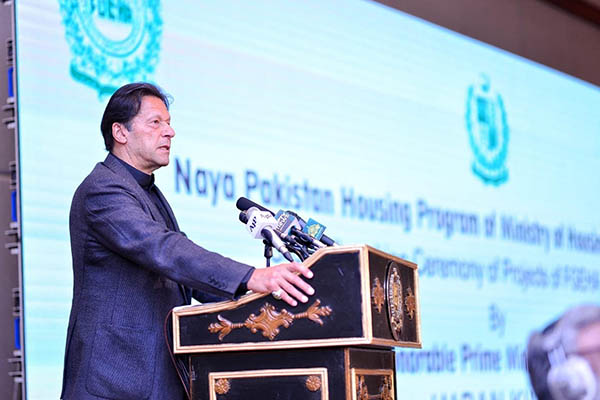 A culture clash is developing in Pakistan due to differing education systems, Prime Minister Imran Khan said on Wednesday, adding that this was most visible in last week’s Aurat March 2020.

“We will, hopefully by next year, introduce a core syllabus for all schools that will be mandatory for students apart from the additional subjects each institution chooses to teach,” Khan said in a speech marking the groundbreaking ceremony of housing projects for low-income people. “This is how you create a nation. This is how you end rival cultures from developing,” he said. “The Aurat March that just happened… a different culture was visible in it… this is a cultural issue and this comes from the schooling system,” he added.

Khan said that by adopting a uniform education system, Pakistan could bring an end to the societal divide that is perpetuated by different educational standards in English-, Urdu- and religiously-inclined syllabi.

Earlier, performing the groundbreaking of Rs. 100 billion housing projects that seek to build 20,000 housing units for low-income groups in Islamabad, Rawalpindi, Lahore and Quetta, the prime minister said the government’s desire to pursue the construction of low-income housing had finally borne fruit. As part of this goal, he expressed pleasure over a decision by the Lahore High Court on foreclosure laws, saying it would bring a revolution in the housing sector through increased financing by banks.

Referring to the country’s economy, Khan said interest rates would come down as inflation reduced. He lamented that government employees and police personnel struggled to build their own houses with their salaries, adding that the government would seek to arrange bank financing for them. Affordable housing, he said, would only aid the low-income segments, but would also benefit 40 industries allied with the construction sector, creating job opportunities and pushing economic growth.

Describing 2020 as the year of economic growth and jobs creation, the prime minister said cities were being expanded which gave rise to serious issues like pollution, lack of basic facilities and food security. “The government had decided to implement master plans for the urban areas,” he said, adding that to promote more green spaces, the government would promote and encourage the construction of high-rises.

The prime minister said he had promised himself that if he ever came into power, he would work to ensure shelter for people he had seen sleeping on pavements in Lahore. This is why, he said, he had started establishing shelters for homeless people—which now number 160.

Khan also discussed his government’s health-card scheme for the poor and claimed it was this initiative that had convinced the people of Khyber-Pakhtunkhwa to give the Pakistan Tehreek-e-Insaf another term in office. He said five million people in Punjab had so far been provided with health cards and another million would get them shortly. Recipients of the cards would get free treatment up to Rs. 720,000 at public and private hospitals.

The prime minister said strengthening education, health, housing and justice systems were the priority areas of his government. He said the government would soon introduce a Legal Aid Bill, which would require the state to provide legal aid to anyone who could not hire a lawyer.

If the leader of a nation says these words ehat cam you ecpect from the people .. Shame

You imbeciles have misquoted him and taken his words out of context. Correct your headline. You have a responsibility to decimate authentic news. Realize that.

Freedom of expression is everyone’s right