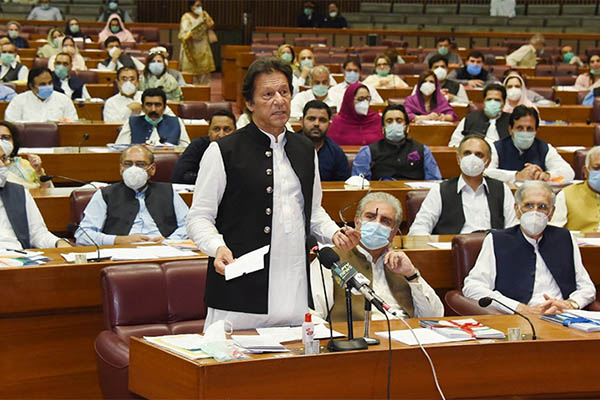 Pakistan has “no doubt” that India is responsible for a foiled attack on the Pakistan Stock Exchange building in Karachi, Prime Minister Imran Khan said during a speech in Parliament on Wednesday.

“What happened in Mumbai, they wanted to do the same [in Karachi]; they wanted to spread uncertainty. We have no doubt this was done by India,” he said, as he lauded the actions of a police sub-inspector and three security guards who were killed in the assault as “heroes of Pakistan.”

The prime minister said the “sacrifices” of the four had thwarted a major incident. “My cabinet and its ministers know that all our agencies were on high alert. Our agencies preempted at least four major attempts of terrorism and two of them were around Islamabad,” he claimed, adding that the security forces’ defeat of the militants was a “huge win.”

Addressing Parliament—for the second time in less than a week—after the passage of the federal budget for fiscal year 2020-21, the prime minister thanked his team for presenting a “tax-free” budget.

He dismissed speculation that the opposition could have prevented the bill from passing, claiming the government had actually gained support this year as compared to it’s last year in power.

The prime minister said he and his finance team were aware this was a “difficult budget,” adding that the government had revised its revenue target from Rs. 5,000 billion to Rs. 4,900 billion due to the economic doldrums arising from the coronavirus pandemic. He, once again, claimed the government would have met its tax collection target if COVID-19 had not slowed down the economy, resulting in a Rs. 1 trillion shortfall.

“I salute my team, who were criticized for being ‘confused’, because we did not do a sweeping lockdown that we were being pressured into doing,” said Khan as he once again reiterated his view that Pakistan should never have locked down in any capacity.

“They gave us examples of Sindh … if I was listened to, I would still not have done the lockdown that we did. I would have tried to keep things running,” he said, as he once again differed from health experts on how best to overcome the pandemic. “Thank goodness we didn’t succumb to the pressure; the world has accepted that smart lockdowns are the only way to combat the virus,” he added.

The prime minister again reiterated his praise for his team, focusing on Special Assistant to the P.M. on Social Protection Sania Nishtar for distributing emergency cash among the needy under the Ehsaas Program.

Khan said the entire services sector and small and medium enterprises had been affected by COVID-19, reiterating that the northern areas were particularly struggling due to their reliance on tourism. He said the government was devising a plan to help them further. He said it was thankful Pakistan had allowed agriculture activities when it did but warned that no one could predict when tax collections would improve.

The prime minister said the government must now focus on reforms in loss-making public-sector corporations to achieve the “best of times” in the future. He claimed the power sector could only be fixed through “drastic changes” and vowed that his government would resist all moves by the status quo to prevent this. He reiterated his claims that all public-sector organizations were full of “mafias,” and claimed that no organization could prosper if it had 10 chief executives in 11 years like PIA. Pakistan Railways and Pakistan Steel Mills would also need to be “fixed,” he said.

Referring to “cartels,” the prime minister took aim at the sugar industry and slammed the opposition for its financial stake in the industry—he did not make any mention of his own party’s Jahangir Khan Tareen, who profited the most off government-issued subsidies in 2019, when sugar prices skyrocketed in the country.

“We want businesses to make money, our farmers to make money, but they must also pay their due taxes,” he said, adding that no successful society could function without the rich paying taxes. “The Madina-e-Riyasat also took money from the rich in the form of zakat and used it for welfare,” he claimed. “People who don’t pay taxes are looting our nation, our poor farmers and the government,” he said, adding that it was his “mission” to bring all such “monopolies, cartels, mafias” in the ambit of law.

“Whatever they [opposition] say makes no difference to me… I don’t mind it and they don’t matter,” he said, as he pointed to opposition benches that were empty because of a boycott prompted by an argument between treasury and opposition lawmakers earlier in the day.

The prime minister, as has become routine for him, spent several minutes accusing the opposition of corruption. “These leaders have caused more damage to the international reputation of Pakistan than even our enemies,” he claimed, without offering any clarification or apology for declaring Al Qaeda leader Osama bin Laden a ‘martyr’ in Parliament less than seven days earlier. There has been much criticism of Khan’s words in the international press, which has branded him a terror sympathizer on the back of his statement.

Khan accused the opposition of having no “faith,” and claimed he had never wavered in his “vision” of a Madina-e-Riyasat for Pakistan. He also took some time from his criticism of the opposition to thank front-line healthcare workers in the fight against COVID-19 for their efforts during this time.

The prime minister claimed the opposition’s 30 years of rule—a false assertion as 10 years from 1999-2008 were governed by Gen. Pervez Musharraf—had ruined the country’s “morality.” He claimed the PPP and PMLN had colluded to keep each other in power and, perhaps forgetting the months he had spent atop a container in Islamabad, slammed the opposition for trying to bring down his government by “saying it had failed, or climbing on container.”

“It is up to Allah whether or not I remain in power,” said Khan, adding that he lived in his own home and paid for all his own expenses apart from travel and security. “I do not ever want to be worried about leaving [the P.M.’s] seat,” he said, adding this ensured he would never have to compromise on his principles.

“No one has accomplished anything without struggle,” said the P.M., as he mocked PPP Chairman Bilawal Bhutto-Zardari’s speech patterns to the delight of his party’s lawmakers.

He said that if the PTI succeeded in its reforms program, Pakistan would soon emerge as an “example” for other developing nations to follow as it had in the 1960s. He has not yet offered any concrete plans for his reforms.