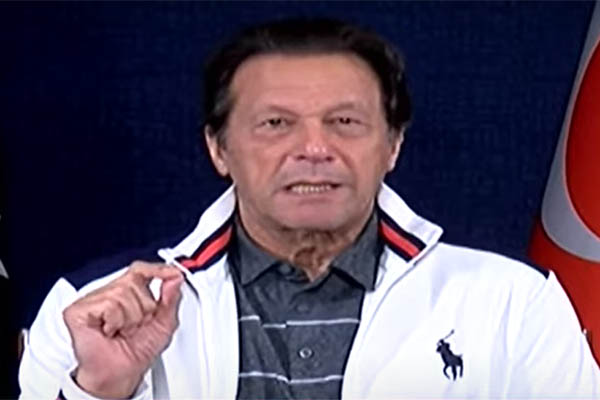 Screengrab of an earlier video statement of the PTI chairman

Pakistan Tehreek-e-Insaf (PTI) Chairman Imran Khan on Friday backtracked from an earlier interview in which he had come out against the attack on author Salman Rushdie at an event in New York last week.

On Friday, British publication The Guardian published an interview with Khan in which he described the attack on the author of The Satanic Verses as “terrible” and “sad,” adding that while the anger over the book was understandable, there was no justification for violence. “Rushdie understood, because he came from a Muslim family. He knows the love, respect, reverence of a prophet that lives in our hearts. He knew that,” Khan told The Guardian. “So the anger I understood, but you can’t justify what happened,” he added.

As the interview started circulating on social media, supporters of the right-wing Tehreek-e-Labaik Pakistan (TLP) accused the former prime minister of supporting a “blasphemer” while Jamiat Ulema-e-Islam (Fazl) chief Maulana Fazlur Rehman used it as “proof” of allegations that Khan was “an agent of foreigners” against Islam. PTI supporters, meanwhile, sought to defend Khan by highlighting earlier statements in which he had called Rushdie “unbalanced” for criticizing him over the boycott of an event in India that was to be attended by both.

Rejecting the criticism, Khan told 92News—in a video also shared by the PTI’s official Twitter account—that The Guardian had taken his statement out of context. “I had refused to attend an event in India over its invitation to Rushdie,” he recalled, noting that Rushdie had given a speech against him over his boycott. “During the interview, I had sought to explain the Islamic position on [legal action against] blasphemy, and had cited the Sialkot tragedy as an example,” he said. “It was in this context that I had talked about Salman Rushdie,” he added.

The lynching of a Sri Lankan national in Sialkot last year had drawn widespread condemnations, with the government vowing to ensure all culprits were brought to justice. Several Islamic leaders had, at the time, issued statements stressing that Islam does not permit incidents of mass violence and emphasized the need to ensure that the country’s blasphemy laws be exercised in all cases of alleged blasphemy to avoid such incidents in future.

“The horrific vigilante attack on factory in Sialkot and the burning alive of Sri Lankan manager is a day of shame for Pakistan,” said then-prime minister Khan. “I am overseeing the investigations and let there be no mistake all those responsible will be punished with full severity of the law. Arrests are in progress,” he had emphasized.

Every scoundrel claims his words were “taken out of context” when he’s caught out. In this case it’s noteworthy that Khan feels compelled to take the “out of context” defense lest anyone think he actually supports the freedom of speech and Salman Rushdie’s right to live despite having ostensibly offended Islam. Aren’t the Muslims who support jihad violence just a “tiny minority of extremists”? So why is Khan so afraid of appearing to support Rushdie?

Yet another nail in the coffin of Islam…..