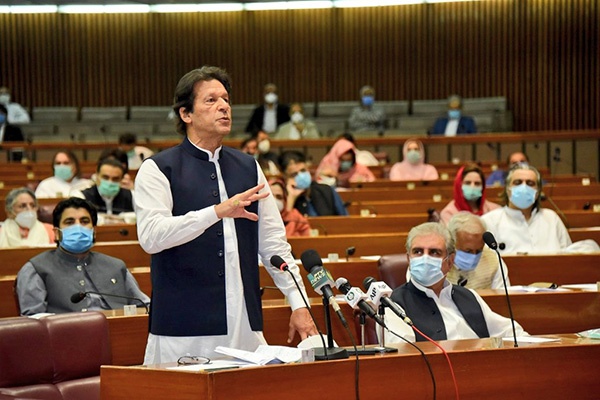 Defending his government’s much-criticized response to the ongoing coronavirus pandemic, Prime Minister Imran Khan on Thursday claimed his “team” had never been confused about its approach to balance fighting the virus and preventing people from going hungry.

“They [critics] repeatedly say there was confusion … if there was one country whose government did not have confusion, it was ours,” he claimed, as he reiterated the steps the government had taken since the first confirmed case of the virus was reported in Pakistan in February.

Repeating that he had never supported lockdowns to curb the spread of COVID-19, the prime minister noted that the provinces had all implemented movement restrictions in March when the country only had 26 cases and no deaths. “My team and I believed from day one that the lockdown model used in Wuhan and Western nations could not be replicated in Pakistan because the situation in the Indian subcontinent is very different,” he added.

Repeating his claim that the government had to worry about saving lives from coronavirus on the one hand, while also preventing people from dying of hunger, Khan said his government had come under a “lot of criticism” and pressure to implement a harsher lockdown, but they had thankfully resisted. “Data proves our government took the right steps to respond to the health crisis,” he claimed.

Referring to India, the prime minister said independent research showed their economy had been massively impacted by their lockdown. “It was said that we were confused [in our response],” he said. “If there was any government in the world that wasn’t confused, it was ours. Since day one,” he added.

Challenging the opposition to identify a single contradiction in his statements since the coronavirus pandemic swept through Pakistan, he said he had always maintained that we have to think about the impact on the poor. “These have been consistent statements on my behalf. You have all my speeches on record,” he said.

The prime minister said that thanks to the National Command and Operation Center, Pakistan had finally gathered data on its healthcare facilities. “We had no figures previously for how many ventilators exist in Pakistan, how many intensive care beds there are, how much staff is available,” he said. “We were the first to talk of a smart lockdown. It was the NCOC,” he claimed, as he defended his government’s decision to ease lockdowns by comparing it to America, which has also started easing restrictions against the advice of medical experts.

“Smart lockdown means we’ll protect the elderly, those with compromised immunities and at-risk individuals,” he said, adding that the volunteer Tiger Force would monitor standard operating procedures (SOPs) because the civil administration was already “too tired” with the responsibilities it had.

Extending his condolences to the families of the nearly 4,000 people who have thus far died from COVID-19, the prime minister said the next month would be “difficult” but if everyone adopted SOPs, “our facilities are enough to be able to cope with it.”

Addressing claims from the opposition that the government was hiding behind the coronavirus crisis to defend its flagging economic policies, the prime minister said the global economy had suffered a $12.3 trillion setback. He said England has experienced 20% shrinkage and its growth had gone into negative. “The whole world is saying that this is the worst economic crisis in a 100 years,” he said, adding that no one could predict how long it would take for a full recovery. “Industries have been shuttered which will never be revived again. The services industry, tourism sector and airlines have all gone into a crisis,” he said, as he listed the economy the PTI had inherited and the steps it had taken to overcome it.

“It is not as if Switzerland’s economy was handed over to us,” he said, as he compared the incumbent government’s current account deficit ($20 billion), import and export levels with those of the previous government.

“We inherited an economy with $20 billion current account deficit,” he said, adding that exports were stagnant while imports were more than $60 billion. He said his government was forced to take loans just to pay off the loans that previous governments had taken.

“I have raised funds all my life, and I have not been ashamed of asking for money from Pakistanis,” he said, referring to his fundraising campaigns for Shaukat Khanum Hospital. “What I am ashamed of is when we ask for money from other countries to pay a debt that was not due to us,” he said, without discussing how every subsequent government—across the world—has to pay off loans from previous regimes as part of the democratic process. “You have to look at their eyes and wonder what they think of our country,” he said.

“The prime minister is like the father of the country, while the countrymen are his children,” said Khan, saying austerity measures must be reflected in all sectors of society for them to succeed. He said it was embarrassing to seek foreign loans. He said even the Pakistan Army had, for the second time in the country’s history, had agreed to a budget freeze.

“We must prioritize the construction and agriculture sector,” he said, adding that the government was seeking to import technology from China for seed development. He said the government had waived duties on thousands of items of raw material so the country’s exports could increase.

Talking about the allocation of resources to former FATA areas, Khan urged all the provinces to cut their funding under the National Finance Commission Award. “All the provinces gave their word that they would give 3 percent of their NFC for FATA’s development as it was affected grossly by the war on terror,” he said, adding they were bound by their word.

In a bizarre occurrence seemingly verifying critics who have accused Khan of being a Taliban sympathizer, the prime minister spent some time discussing the assassination of Al Qaeda chief Osama bin Laden in Abbottabad, and declared the terrorist a “shaheed” (martyr). “It was such an embarrassing time for us,” said the prime minister, claiming overseas Pakistanis had suffered due to the terrorist being killed on Pakistani soil without the government being aware of it.

He did not discuss whether it had been embarrassing for Pakistan that it had been housing a globally wanted terrorist for several years mere miles from a top military academy.

The prime minister alleged India could take advantage of the situation in the former FATA areas to instigate unrest if the provinces did not commit to funding it through the NFC.

Khan said he believed his government’s biggest success in the past two years was in the realm of foreign policy. He claimed his speeches and the efforts of the Foreign Ministry had elevated the issue of Kashmir to a global problem, adding that the west had not paid so much attention to the disputed region ever before.

He said he had repeatedly mentioned that the measures taken by the Indian government against minorities, especially Muslims in Kashmir, would have serious consequences. “I have to warn you that India is trying to destabilize Pakistan,” he said. “We are up against a Hindu supremacist, fascist and Nazi-inspired ideology,” he said, adding that the conflict between Pakistan and India was now one of ideologies.

The prime minister said the Kashmir issue could only resolved through dialogue, but India has repeatedly rebuffed these efforts. He accused Indian P.M. Narendra Modi of “arrogance,” adding that he had even resisted efforts for peacemaking from U.S. President Donald Trump. “Kashmir has reached the point of no return. I expect once coronavirus is over, India will not be able to stop them,” he claimed.

“Our foreign policy’s success can be seen from Trump always being very kind in his dealings with Pakistan; for them crediting us for the Afghan peace process,” he said. “We will become a country that unites other countries, not one that fights others’ wars,” he added.

Khan congratulated Education Minister Shafqat Mahmood, claiming he had developed a means to end the “education apartheid” in the country by implementing a uniform syllabus nationwide from March 2021.

He said his government had much to learn from neighboring China, ties with which he described as “better than they had ever been before.” He said Beijing had developed a welfare state that he wanted to replicate in Pakistan and reiterated his belief that Riyasat-e-Madina was the only solution.

The prime minister also hit out at various “mafias,” including sugar, oil and wheat, accusing them of creating shortages and causing inflation. He claimed his government was focused on accountability and meritocracy, adding that no country could succeed without these attributes.