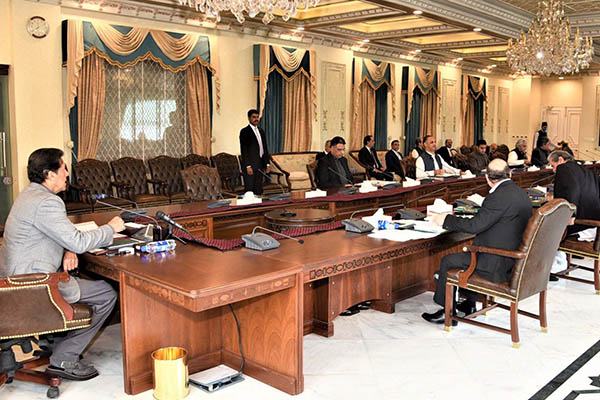 Prime Minister Imran Khan has directed the paramilitary Sindh Rangers to ensure that goods transport from the province to the rest of the country is not restricted due to an ongoing partial lockdown amidst a coronavirus outbreak, Special Assistant to the P.M. on Information Firdous Ashiq Awan said on Tuesday.

Talking to media after a federal cabinet meeting, Awan said that the prime minister had “in strong words” expressed his displeasure over the Sindh government hampering transport lines for essential goods. She said this ran counter to a National Coordination Committee decision for all four provinces, Gilgit-Baltistan, and Pakistan-administered Kashmir to keep transport lines open for all essential goods.

“As all exports and imports take place through ports in Sindh, which is currently under lockdown, traders are facing challenges in securing basic commodities,” she said, adding, “The supply goes all the way to Gilgit-Baltistan. With no loaders present or those who pack goods or a lack of facilities, the supply chain is facing a delay. Rangers will ensure all obstacles in the transport of goods are removed and the transport of goods is secured and ensured.”

Transporters in Sindh have complained in recent days of police harassment at ports, adding that this was making it difficult for them to continue their jobs. They have also urged the government to ensure facilities at highways, including food and repair workshops, remain open to allow drivers to fulfill their functions.

Also on Tuesday, Awan said that the federal cabinet had been informed of reports that coronavirus patients are being treated as “untouchables,” terming this behavior a “criminal act.” She said the prime minister had expressed great displeasure at this. “Law enforcement agencies or hospital security officials mistreating them have been strictly told to treat them well and not treat them as criminals and not to push them into quarantine,” she said, adding that admission to quarantine facilities should be done “respectfully” and with the consent of patients and their families. “All governments have been directed to strictly comply with this,” she added.

The special assistant to the P.M. said the cabinet had also approved the issuance of Sukuk bonds with a three-year maturity. “With this approval, the government will now be issuing domestic Sukuk bonds,” she said, noting that this exercise had taken place 19 times previously. “This is an important and positive step in the promotion of Islamic banking,” she said.

“With this bond, liquidity issues would be addressed. They would also provide a Shariah compliant return. The government has set a Rs. 700 billion target, which would help it develop an action plan to aid the economy,” she said.

Awan said the prime minister had also directed to introduce reforms in PIA, the Federal Board of Revenue and the Pakistan Railways to promote e-governance. She said the Labor Ministry had also been ordered to prepare a strategy to register the country’s laborers so their social, health and job security could be ensured.

To a question, the special assistant said that the opposition should avoid politicizing the current situation and join hands with government in its efforts to contain the coronavirus. The government welcomed all suggestions and proposals by the opposition in this regard, she added.