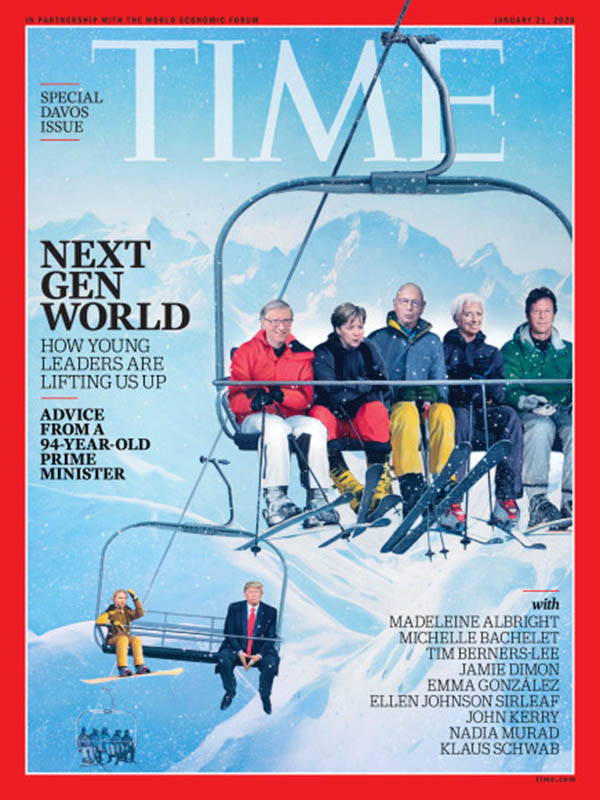 Prime Minister Imran Khan is among the global leaders featured on Time magazine’s cover for its special edition on the World Economic Forum that kicks off in Davos, Switzerland today.

The cover features a photo illustration with Khan, Microsoft founder and philanthropist Bill Gates, German Chancellor Angela Merkel, World Economic Forum (WEF) Executive Chairman Klaus Schwab, and European Central Bank President Christine Lagarde astride a ski-lift with snow-covered Swiss Alps in the background. Also featured are U.S. President Donald Trump and climate activist Greta Thunberg, whose at-times combative exchanges are reflected by the wide gap between them. It is headlined Next Gen World, with the story promising to highlight how young leaders are helping the globe.

According to Pakistan’s Foreign Office, this year’s WEF is being staged under the theme of ‘Stakeholders for a Cohesive and Sustainable World.’ Prime Minister Khan is set to deliver a keynote address at the Special Session, and is also slated to interact with corporate leaders at the Pakistan Strategy Dialogue. Several meetings are scheduled with a wide range of corporate, business, technology and finance executives, as well as representatives of international financial institutions.

Local media has reported that the P.M. would hold bilateral meetings with several world leaders on the sidelines of the summit, including U.S. President Donald Trump. He would also speak to senior international media persons and editors during a session with the WEF’s International Media Council.

Per the Foreign Office, Khan would share Pakistan’s vision and achievements in the areas of economy, peace and stability, trade, business and investment opportunities during his trip to Davos. He would also highlight the current situation in India-held Kashmir and Pakistan’s perspective on key regional and international issues, it added.

The annual WEF summit kicks off today (Tuesday) and will last four days. This year marks the 50th anniversary of the forum and political leaders, business executives, heads of international organizations and civil society representatives are set to “deliberate on contemporary economic, geopolitical, social and environmental issues.”