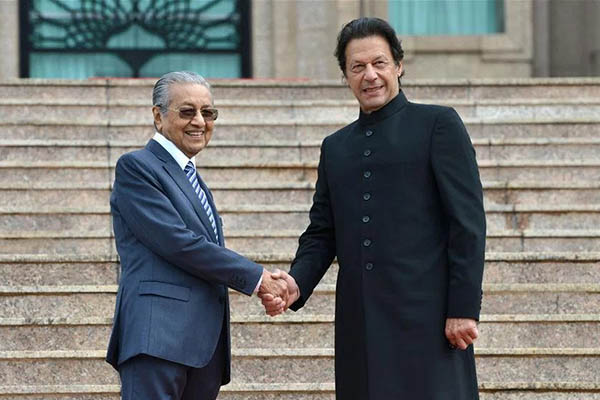 Prime Minister Imran Khan on Tuesday said he hopes to attend the next Kuala Lumpur Summit in Malaysia, adding it was unfortunate some countries “close to Pakistan” had believed it would divide the Muslim Ummah.

“Unfortunately, our friends, who are very close to Pakistan as well, felt that somehow the conference was going to divide the Ummah,” he said at a joint press conference with Malaysian P.M. Mahathir Mohamad. “It was clearly a misconception because that was not the purpose of the conference as evident from when the conference took place.”

Rather, Khan said, the forum would help promote unity within the Ummah.

Last year, Khan abruptly pulled out of the Kuala Lumpur Summit, reportedly because Saudi Arabia believed it would diminish the importance of the Riyadh-led Organization for Islamic Cooperation. The move was widely seen as Islamabad betraying its own interests in support of the Gulf kingdom’s desire.

In Malaysia, the prime minister said events like the Kuala Lumpur Summit were important because they helped Muslim nations unite in educating the western world about the true teachings of Islam. He reiterated that Malaysia and Pakistan were working on a joint media initiative—a promise he had earlier claimed would be fulfilled at last year’s summit—that would project a positive image of Islam to combat rampant Islamophobia. This initiative would also educate young Muslims about Islam, he added.

During their joint press interaction, Khan thanked his Malaysian counterpart for standing by Pakistan on the issue of Kashmir. He also praised Mohamed for speaking out against the injustices being perpetrated by Indian forces in Jammu and Kashmir.

The prime minister said it was unfortunate that a “radical and extremist” government had assumed control in India, noting Delhi’s actions in the disputed region had turned Kashmir into an open-air prison for its residents. He also regretted that India had responded to Malaysia’s support for the Kashmiris by cutting its palm oil exports from the country. “Pakistan will do its best to compensate that loss,” he said, suggesting that Islamabad would soon start importing palm oil from Kuala Lumpur.

India has reportedly asked traders to stop buying from Malaysia, the world’s second-biggest producer and exporter of the edible oil, over Kuala Lumpur’s view that Delhi’s recent actions are discriminating against Muslims.

Khan said there was great potential to improve trade and economic relations between Pakistan and Malaysia, as the people of both nations already enjoyed great affinity for each other. He said both countries hoped for forge a closer relationship, and expand their cooperation in the defense sector.

The Malaysian prime minister, meanwhile, said Khan’s visit to the country reflected Islamabad’s commitment to promote the multifaceted relations between their two countries. He said Malaysia would continue to foster and deepen relations with Pakistan.

Mohamad said the two leaders, during their talks, had discussed the current issues facing the Muslim Ummah, including the issue of Palestine and a U.S.-proposed Middle East peace plan. He said Khan and him had agreed to increase cooperation in upholding the true values of Islam and promoting the solidarity of the Ummah.

During the talks, the two sides signed an extradition treaty, and also discussed the entire spectrum of bilateral relations and the ways by which their relations in various fields such as trade, economy and tourism could be expanded.

The two sides also agreed to regular discussions to strengthen trade and investment relations by removing barriers in key areas and developing linkages between the private sectors of two countries.

Both sides also expressed commitment to build stronger ties in the areas of defense, law enforcement, tourism and education. They agreed to more exchanges at different levels to set the future course of their bilateral relationship. The two sides reaffirmed commitment to ensure stronger collaboration amongst various ministries and agencies to enhance friendship and understanding between the two nations.